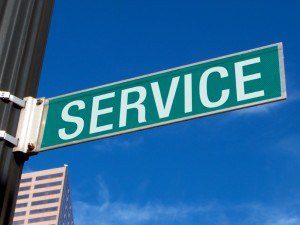 For some, “French Service” is an oxymoron.  Some like to say the same thing of American Intelligence.  But as far as French Intelligence is concerned and American Service, we tend to be on the right track!

Regarding French service, there has been much written about the issue of bad, snooty-nosed, unfriendly service in French’s stores, hotels and restaurants.  It is typically a Parisian problem, but Paris doesn’t have the monopoly on grumpy faced servers in France.  Where does this culturally imbued talent come from?

I believe there are three main culprits.

1. Poor incentives.  There is no incentive to do a good job in restaurants.  The French have an ironic concept called “service compris” whereby tipping is automatically included on the restaurant bill no matter the level of service provided,  Service compris means two things in French: the tip (‘service’) is included and the service is understood.  Clearly, it is more a case of service mal-compris.

One might say that this is just one industry, but it is an industry that has a far ranging reach — and is particularly visible to the tourist.  At the other end of the scale, tipping is not customary when the tips are not automatically included.  French tourists don’t naturally whip out a dollar bill (five?) for a kind service rendered.

About the only time I see tips being handed out in France is in a hairdressing salon where the opportunity to slip a few euros into the dashing stylist’s pocket seems a good trade-off for the bo-bo (bored bourgeoise) lady.  Adding 15% to a taxi fare seems out of the question for the common Frenchman.

Speaking of taxis, of course, the Parisian taxi driver is another great example of poor service.  The situation is tipically resolved in that you hardly ever WANT to give a pourboire to a French taxi driver.  (I have written many articles, en français, about the taxi situation in Paris).  Notwithstanding the obnoxious attitude, the extra change “to drink” for a driver seems a little out of place, no?

The notion of smiling as a welcoming greeting is a foreign concept.  And great service — as generally recognized internationally — is just not on the radar for French management.  The frown is de rigueur.  Being at someone else’s beck and call is beneath most French people.  You would think it is akin to being a slave.  Regardless of the financial incentive, it is culturally, an undesired trait.  On the plus side, where the French sometimes have an edge is the area of discretion.

Service in a distinguished luxury hotel should be invisibly impeccable and refined.  In this, there may be grounds to develop a specific and successful French notion of service.  As my suave friend Kevin says, sometimes you need to deserve the concierge’s good guidance.  So, why is this the case?

2. Education.  The French educational system privileges knowledge accumulation; and, the more rational the subject matter, the more noble the endeavour.   Competence and know-how are the focus of the national education system.  [Ask a concierge the history of the building and he/she could very well expound lyrically.]  The FNAC is a classic example of knowledge as a service gone wrong.

The FNAC employees are supposedly picked for their passion and knowledge in a category.  Then again, they need to want to share that knowledge to the ignorant customer.  Teamwork and positive attitude are, at best, an after thought in the French education system.  Great service, on the other hand, involves empathy, humour and, above all, attitude.

3. The French consumer.  In a re-interpretation of the egg or the chicken debate, I think it takes two to tango.  If I were a salesperson at a retail store in Paris and were confronted day in and day out by the grumpy, frowning French customer, constantly looking down on me as if I were a sub-citizen, it is possible that I might also give up the mantle (read pretense) of good service.  It is highly possible that the customer (who went through the same high school system) has trained the salesperson in his/her image.

Culturally, the French are brought up with a critical mindset.  Critical thought is a highly valuable skill.  However, when critical thought moves from intellectual debate to strict judgment, there is a tendency to want to complain and to put others down; furthermore, the result can be that one is never content with anything.

The art of critical thought begat the French pastime of complaining.  No one is ever happy with anything, which means we should just try not to be happy, period.  Take the weather.  Most of France has a true four seasons — essentially mild compared to the summer in Las Vegas or the winter in Montreal.  However, in the summer in France, you will hear the very same people who complained that the winter was too cold that the summer is too hot.

Frankly, though, you might be excused for thinking that the French prefer to stay amongst themselves to rant and rave within the confines of France, to evaluate each other’s ‘esprit‘ (quickness of mind, sharpness of tongue) and to complain about la condition humaine.

If you watch French roundtables on national television here, you will find plenty of well educated people that like to debate endlessly (and to cut each other off in mid sentence).  With more or less eloquence, the debates in isolation could be considered interesting.  However, the reality behind the debates is that they are more about having one’s opinion aired and heard than actually bringing about change.

The notion of responsibility for one’s ideas is limited to the articulation.  And, heaven forbid the idea should make true sense.  Once the individual’s ideas are out in the public, the collective spirit of France unfurls the flag and puts up red, white and blue tape to squash it, for a return to the unchanged, unchangeable way it was.

The French give great importance to ideas and there are many extraordinary French philosophers and writers.  Ideas are definitely more noble than action.  However, service is all about action and execution.

Taking a slight tangent, it occurs to me that the French are so enamoured with aesthetics and critical thought that it is the quest for the ideal, the perfect solution, that impedes progress.  Critical thought suggests that you can always find another, superior way.

The French are masters of la remise en cause, to put into question the actual premise for doing a particular act in the first place (before even wanting to improve it).  Perfection is indeed a wonderful ambition.  However, it cannot become an excuse for inaction.  The ship will by pass by if you wait for Valhalla.   And in the meantime, service-related businesses trying to develop in France — such as hairdressing salons, retail outlets, or a visiting company such as Starbucks —  are suffering from a lack of a trained talent pool.

If Paris is the city of lights, an illuminated denizen of brilliant thinkers, one wonders when light bulbs will turn on about the need for quality service if the millions of tourists are going to keep wanting to return.

What do you think? What ideas do you have?

For some good reading on the topic of French service, I suggest “Service Compris” (2000) by Philippe Bloch/Ralph Hababou/Dominique Zardel.