While watching television (the film Hurt Locker and #RWC11) this weekend on my trip to Liverpool (UK), I was delighted by two sets of ads.  Not very often that happens, so I thought I would share the experience.   This is proof that there is still room for great storytelling and entertaining ads.

The Volkswagon Group, which owns a robust portfolio of brands, peppered the Hurt Locker (the 2008 film about Iraq, directed by Kathryn Bigelow, that I highly recommend) with quite an exceptional trio of ads from three different brands.  There was Audi vaunting green tech; Volkswagon’s “Think Blue,” using the RSAnimation technique depicting the history from the iconic Beetle to today; and Skoda combining visual aesthetics and music on wine glasses.  Each ad was enjoyable or surprising in one way or another.  Hardly your average car ad in each case. 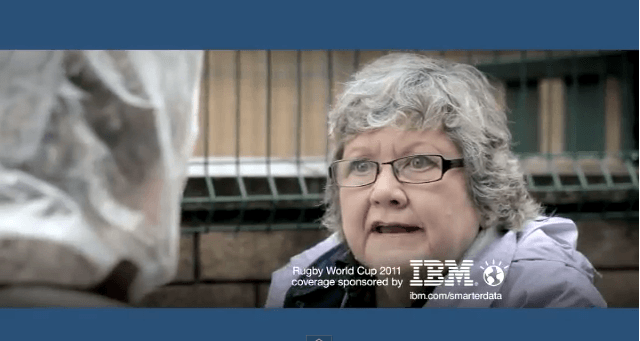 Then, during the Rugby World Cup 2011, IBM (which was the sole sponsor of the ITV coverage of the tournament) rotated through their Smarter Data for a Smarter Planet campaign. The content was contextual, referring to data (and facts) about rugby delivered by a coterie of different profiles, including a number of women (including a couple of wheelchair-bound women)… Reminds me of a Grateful Dead song, The Women are Smarter, that’s right.

Since the ads were cycled through only once, I became hooked to hearing on what each ad would announce.  My main gripe would be that some of the stats were a tad meaningless… Also, I wasn’t able to make out what was said in several of the ads (poor sound quality, mumbled words…) despite repeated viewings on YouTube.  In any event, below are some of the rugby facts as presented by IBM in this series:

While oriented because I wanted to write this post, you can see how some ads on television could draw you to the site/youtube to review the ads if they were sufficiently well done.   And, while you’re at it, why not make them more informative, pertinent and interactive?

Meanwhile, on the subject of great leadership, the best quote of the RWC came from the All Blacks catain, Richie McCaw “Work for the best, but expect the unexpected.” That post-game statement beautifully summed up how the Blacks managed to pull off the Championship.