Digital Marketing by the Pols 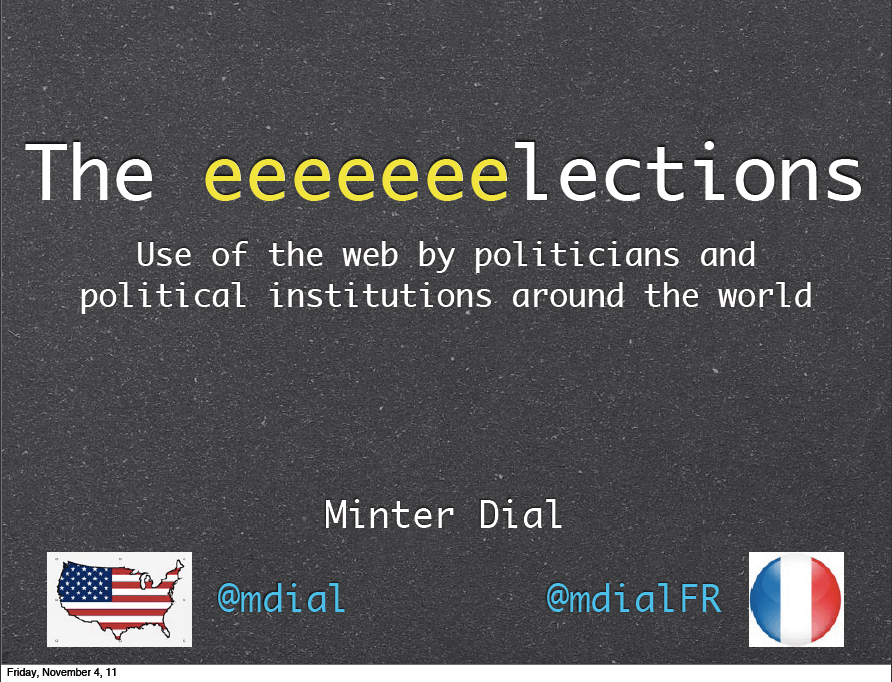 eeeelections on the web & diplomacy 2.0

I made a presentation a couple of weeks ago at Hotel Napoleon, at the Conference entitled “Innovation Napoleon.”  This conference, at which I have made a number of presentations, unites a heterogeneous crowd around digital and innovation topics.  Usually, there is anywhere up to 100 people in attendance.  At this last conference, I was asked to provide a “breather,” sandwiched in between presentations on the digital marketing campaigns from four major political parties in France (there was no Front National representation).  Which party had the right digital media strategy?

There are a whole lot of different choices to make, based on the political culture, democratic fiber and best local social media tools.  Personally, I see 2012 being a robust year for social media.  How politics and politicians specifically use the web to run their campaigns and influence their constituents will surely have a pivotal role in the way social media itself will evolve.  With 28 different presidential or prime ministerial elections on the docket for 2012, next year will surely be the year that all political bodies take social media seriously.

Some digital stats and analysis of politics 2.0

Herewith a glance at how politicians and politicians around the world are currently using social media, as well as a look at the fledgling notion of Social Media Diplomacy (or Diplomacy 2.0?) and some of the “3rd party” (not necessarily political) applications and tools that have been built around Politics on the Web.

In light of movements such as Occupy Wall Street and the Arab Spring, the question is: will politics use and abuse social media or will social media get the upper hand on politics and politicians?