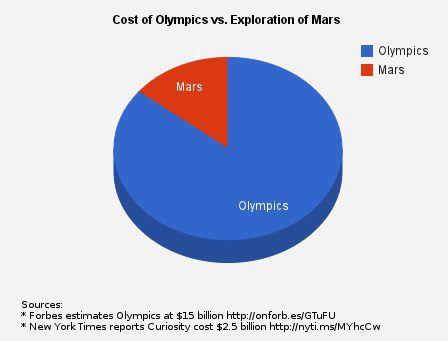 We will soon be able to evaluate the truth — at least half of it — behind the statement that men are from Mars and women are from Venus.

Here are two marvelous assets about the extraordinary voyage of Curiosity to the planet Mars. Who would have thought that we would witness this day? Not only was this a multinational adventure, it was a second giant step for mankind.

Was it worth it?  Are we after the return on investment again?  As wine man, Gary Vaynerchuk says, then tell me the ROI of my mother!  Herewith a great graphic from I F***ing Love Science (FB Page), comparing the cost of the 2012 London Olympics versus the cost of sending Curiosity to Mars (stats from Forbes and New York Times).

And an animated video posted on YouTube last year that shows the journey, the sophistication of the landing and of the scientific kit with which the Curiosity rover is decked out.

You can find more coverage from the JPL NASA Youtube page here.  In a tidbit of information from the Wikipedia entry, the rover has a specific tire pattern or tread mark.  “That pattern is used by on-board cameras to judge the distance traveled. The pattern itself is Morse code for “JPL” (·— ·–· ·-··).”  How crazy is that?  And, what does JPL stand for: Jet Propulsion Laboratory.  Some engineer (as opposed to a brand marketer) was thinking through the whole thing?  Had it been a marketer, what message might you have wanted to inscribe in morse code?

Your ideas or submissions!!