I read over the latest Fortune Global 500, released July 23, 2012, and wondered how people tend to read this issue.  Presumably, 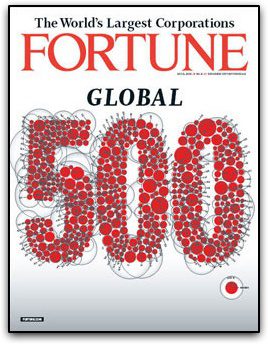 CEOs take immense pride by being part of this list.  But, for you and me and other regular Joe’s and Jane’s, what is your takeaway when you see the Fortune Global 500 listing?  I tend to take a close look at the annex tables, specifically those companies coming in and those exiting the  list, the ones that climbed and stumbled the most.  From a national pride standpoint, there are the countries with the most Fortune 500 companies (Gold for US 132, Silver China 73 and Bronze for Japan 68).  Certainly, I also look at the most profitable companies, although I would tend to view more favorably profits as a function of overall turnover, as opposed to the absolute figure.

My attention was, however, drawn to the groupings at the end, specifically to the categorization of the top 500 companies by country.  My filter was the number of countries where the HQ of the cited companies was spread around the country and how many of the companies had their HQ located in the capital, that is to say where the government is located.  Below is a table that recaps all the countries which have more than 5 companies in the Fortune Global 500.  There are 17 countries in total here (out of a total 36 countries in the full list). 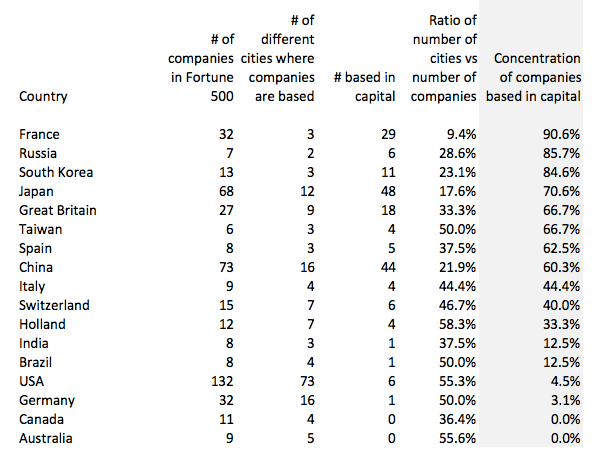 In Table 1, we see the list ranked according to the percentage of companies based in the country’s capital.  NB: For capitals with extended neighboring boroughs, I tended to include anything within 30km of the capital.  For example, Bethesda Maryland or Falls Church, Virginia which are both close to Washington DC.The list speaks to two facets of a country’s economy:

I don’t know about you, but there are certainly a few shockers in Table 1.  The most striking is France, with 90% of the biggest French companies based in or around Paris, followed by Russia, South Korea and Japan.

In Table 2, albeit expressed as a percentage, you will find the ratio of the number of different cities (where the HQ is located) against the total number of Fortune 500 companies. 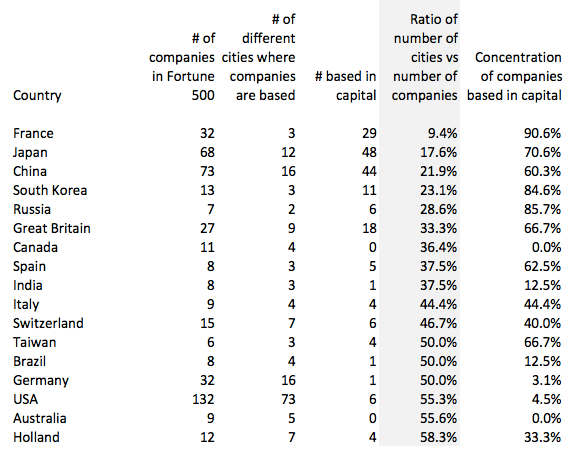 Table 2: Ratio of cities to number in Fortune Global 500, The Myndset Brand Strategy and Digital Marketing

The “winner” is again France, not surprisingly, with 9% or 1 different city for every 10 companies.  After France, there is Japan, China, South Korea and Russia.  Great Britain shows its reliance on London and Canada on Toronto.  Then, at the other end of the table, there is Australia with 5 different cities for its 9 companies, and zero big companies based in Canberra.   At the bottom of the table is Holland, with 7 different cities for its 12 companies.  Quite impressive considering its small size.

What is your take-away from the Fortune Global 500?  Please do leave me your thoughts and analysis!