Which day of the year is the most popular day for birthdays? The answer is that it depends… on the country and culture in which you live, and specifically onthe season and temperature.  It also seems to depend on the source! 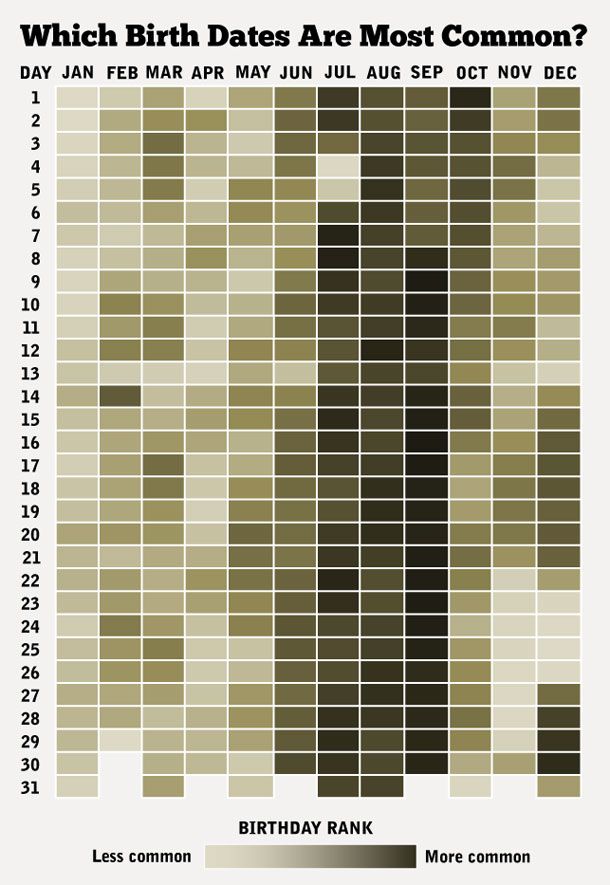 The most popular of all?

According to a survey done by AnyBirthday in 2011 in the US, it is October 5th.  And the least popular day is May 22nd*.  The October 5th date is ineluctably related to the New Year’s Eve celebration, 274 days prior (you can check BetterHealth, an Australian site, for more details about the average human gestation periods).  However, a Harvard University study published by the NY Times in 2006 (rendered as a “heat chart” pictured right), put the most popular date in the US as September 16th, which would put us closer to the beginning of the Christmas holidays in terms of conception.  Least popular days according to the Harvard data were Feb 29 (duh), December 25, Jan 1, July 4th and Thanksgiving.  Talk about cultural impact — and about avoiding certain days.

No data outside USA

Having scoured the internet, I was unable to find any hard data for other countries.  Obviously, if we were talking China, we’d have to imagine 9+ months after the Chinese New Year.  But, China’s lack of transparency on such matters is muddied further by the issue of the single-baby law.  For Britain, there is a much copy&pasted and unverified sentence that says that “Britain’s most common birthday is the 14th of November, as measured by birth certificates before December 1st 2009.”  The same unverified and unverifiable source says that the world’s most common birthday would be the 19th of March (just a few idles days after the Ides of March).  There is just not much more data available publicly on this.  If prodded, Facebook would be able to help us out for everywhere, even perhaps in China (where there are more than 500,000 Facebook users, a statistically viable pin prick).  I wonder if SocialBakers could provide us with that data?  Tweet this to petition some support!

So, I wanted to use my microcosmic community to see which was the most popular birthday amongst my friends and family.  I collated data from Facebook**, Hotmail and my personal information.  With data on nearly 2,000 people, I came up with a real jumble.  It turns out that the single most popular day is July 30th with 13 birthdays versus an average of 5.4.  Surprisingly, July 31st only has one.  There are five days in the year that have NONE, including the famous February 29th and the 4th of July (whereas July 5th has 8!).

Wishing up an app for Social CRM

So, as useless thoughts go, I was wondering over the holidays if there could not be an app to extract the birthdays from all my various networks and collate the data for me accurately.  I suppose that for purposes of organizations such as UNESCO and other NGOs, such data might have a more meaningful use of such data.  Nonetheless, feeding off this thought and a prior post about digital marketing on birthdays, I was thinking that brand marketers could want to have this data scraped off their networks and Facebook fan pages, in an effort to ramp up social CRM activities.  Sending viable and relevant birthday wishes (adjusted for season, temperature, etc.) might be a good start.  Adding in a contextual layer based on other wall comments would be even more powerful.  But, I think we are still a long way from such marketing.  But, wouldn’t it be interesting to have such an application in your digital marketing armory?