If you’re like me, do you try to pack in as much as possible into every day?  One of the tried and true methods to know whether you are advancing in the molasses of daily travail is to conjure up a list of things to do. Some of us use pen and paper.  Others have evolved onto the digital tools (e.g. Remember the Milk…).  Managing that to do list is part of our effort to manage time better.  However, the list of things to do is never just one list. Without intentionally doing so, you might have dozens of lists. It is just that they don’t have the title on the top.

Hidden “to do” lists

Here are examples of to do lists that might surround you and clutter up your day: 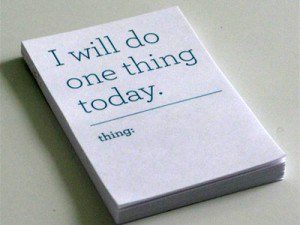 Of course, there are horses for courses and some of you will only use a few of these.  I personally have used all of them.  The issue is that there just isn’t enough time to do them all.  Moreover, some of them have a noxious effect on your memory (the hard drive or the storage in the cloud, that is).  Without having the incisive moment where you do a triage on your lists, you will end up with a cluttered existence and, worse, a sense of inefficiency.  We must learn, with these new forms of list making, to curb, vet and cull with great regularity.  This takes being realistic about what is achievable and, more poignantly, recognizing what is important for you.

What kind of other lists of things “to do” do you have?

*According to research (absract) recently released by Hany SalahEldeen and Michael Nelson at Old Dominion University, we’re losting 11% of our digital history every year. As reported on MediaBistro, ”[e]ach day, they discovered, the world loses approximately 0.02 percent of its culturally-significant information shared via social media. A year after an event has occurred, 11 percent of its information has disappeared; two years after the event, 27 percent is gone.”  So, if you are thinking it’s safe to tag and share as a way to record your favorites, think again!