In the latest US Presidential elections, there were inevitably a lot of factors that went into victory / defeat.  It is a big country, a long race and extremely mediatized.

Trying to pin Romney’s loss (or Obama’s victory) on one single element is rather inappropriate.  However, I was indeed struck by the word clouds of Obama and Romney’s Twitter handle.  In particular, I was (dumb-)struck by Romney’s (see below), which was created by SocialBakers, which evaluated the social streams of the candidates between May 1 and September 19, 2012. 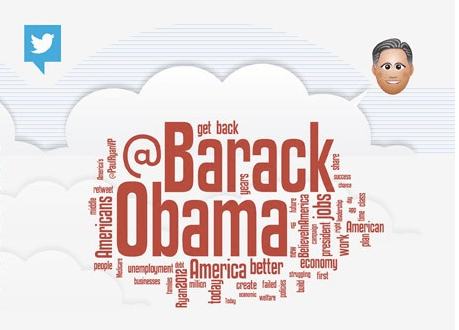 Granted that part of the issue is that Romney was the challenger.  As such, one has much more material to take aim at.  The challenger needs to dispel the belief that the incumbent is suited for another four more years.  Contrastingly, the incumbent has far less anti-material to use against his opponent.  Nonetheless, I have to believe that a communication campaign should not be an anti-campaign.  By spending so much time talking about what Obama did or didn’t do, what Obama is or is not, Romney lost the opportunity to express who he is, himself.  That BARACK OBAMA was, by far, the text that was most often used in Romney’s tweets strikes me as overkill.  Was this point not lost out on the electorate?  Did the final vote come down to a problem understanding “who is Mitt Romney?”  When you compare the word cloud of Barack Obama over the same period (below), the standout remark for me is the importance of the word “RETWEET”.  One could sensibly make the case, in a stream of consciousness read, that he wrote more about agreeing to be President today for America and for women. One used social media, the other got social media.  {Retweet if you agree!} 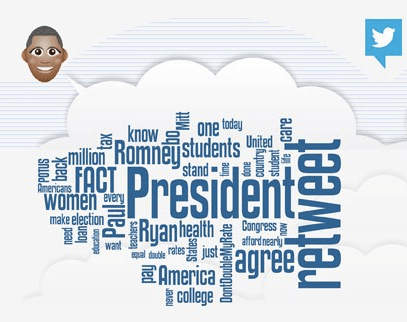 Brand Strategy: defining who you are

Similarly, in brand marketing, one can consider the pros and cons competitive advertising.  But, my point, from a brand marketing perspective, is less about the benefits and disadvantages of competitive advertising per se.  My point is the need for a brand to speak more to who it is, and less about what it does.  On a first level, it’s like non-marketing (“this product does not contain fat“) versus saying what that the product does have/do.  But, on a deeper level, it is about being able to express strong, reliable de facto values, for what the brand stands.

Some companies are entirely (and rightly) proud of their products, the ingenuity of the design, the performance specifications.  However, the issue remains that, by speaking only about the features and benefits of a product, one is not giving enough airtime to the meaning of the brand.  For so many products, the performance playing field is increasingly level.

What makes people talk about a product with the greatest zest is when the product makes a difference in one’s life.  {Click to tweet out if you like that!} That differentiation can, at times, be done by product performance alone; but, in today’s social-media-enhanced existence, the differentiation is also happening via the experience in boutique (or online), the after-sales interactions, the conversation on Twitter… and the de facto values of the brands.

The key question for marketers are: Who are you?  What does your brand stand for?  How can you really make a difference?