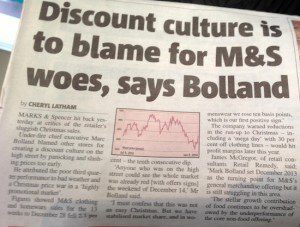 I was struck by an article in the UK Metro daily newspaper headlined, “Discount culture is to blame for M&S woes.”  Three of the major retailers in the UK (Tesco, Morrisons and M&S) announced negative results, despite indications that the UK consumer spent +0.6% more this year versus last year.  Clearly, others were winning out.  One of the reasons cited?  eCommerce.  As the Daily Telegraph writes, “[t]here was a larger than expected swing to online shopping in December.”  In the same article, Philip Clarke, CEO of Tesco, explained, “‘Big business has changed,’ he said. ‘Big business doesn’t mean better. Better means better.'”

Discount culture and the race for volume

In a business where margins are thin (basically between 2% and 8%), it’s always been considered a volume game.  The core concept behind the higher volumes is being able to negotiate (dare I say, screw down) prices from suppliers, such as brands.  Yet, in the realm of having a sustainable and successful business, providing value to the customer cannot be reduced solely to the lowest possible price.

Just as brands that are being sold at retailers need to find ways to warrant premium pricing, retailers need to consider ways to bring an element of branding (i.e. value creation) into their business flow.  From learning more about their customers, ensuring they have motivated staff and creating innovative and/or useful services and applications, there are many ways for the retailer to create value.  Where must retailers spend more of their energies?

The main hook is that the January sale is “still going strong”… and yet it is just January 3rd; so you have to hope that the sale is still going on.  The photo of the Chesterfield is without a logo and certainly isn’t the kind of item I would consider buying at Tesco.  To wit, they write, “we’re tempted…”  £100 off doesn’t sound like a lot for a Chesterfield, since I would expect a real Chesterfield to be much dearer.  Finally, the link that they provide doesn’t send me directly to that item.   Instead, it sends me to the Tesco Sale page, so you still have to find the couch.  Unsurprisingly, the post got little traction on Facebook.  I doubt that there was much in the way of click through.

Getting the right deal

Bottom line (without mentioning profits), I think that this Christmas season saw the inherent in a few retailers’ positioning and strategy in the UK.  The same kind of segregation is probably playing out in markets across the world.