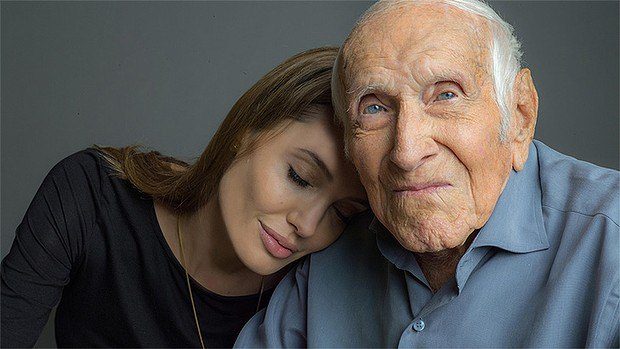 The film, Unbroken, the epic story of Louis “Louie” Zamperini, was released this Christmas Day. Based on

the eponymous and gripping book by Laura Hillenbrand, Angelina Jolie’s inaugural film as a director is a worthy film to see. As stated at the beginning of the film, this is a true story … that is very hard to believe, it is so gruelling and impressive. This 136-minute film was clearly shot with the Oscars in mind, in that there are a number of “big moments” that are portrayed with intentional big screen drama. On the positive side, though, for a wartime film, Jolie did not overplay the violence. It’s a war film, written by a woman, directed by a woman, that shows a man’s war with pathos and intensity. As such, my wife and daughter, as well as my son and myself, enjoyed the film. Neither my wife nor daughter had read the book, so they had no attachment to the book version. And that’s okay, as far as I am concerned, because the purpose of the film is both entertainment and educational. The film does a good job of portraying the emotional journey of Zamperini, played by the English actor, Jack O’Connell. Zamperini’s stout resistance in the face of sadistic treatment is credible and inspiring.

“If you can take it, you can make it”

For someone who has read some 300 books on this part of WWII and has interviewed over 100 ex-POWs, the film, Unbroken, does a standup job of portraying just enough of the inhumane treatment. It glosses over some of the daily miseries, such as the ever-present insects, the menace of tropical disease and the paucity of food and clean water. However, between the missing finger nails, the wretched forced labor, the harrowing punishments imposed on Zamperini and the scene of the hundred punches, the execrable POW treatment is evident. The 30% to 40% death rate in certain Japanese prison camps is understated, since none of the prisoners around Zamperini ever die during their internment.

The film, Unbroken, does not portray the Japanese captors in a favorable light. As mentioned above, there is enough grim treatment in the film to capture the essence of the cruelty. That said, there is no gratuitous violence portrayed, whereas it is well known that there were miscellaneous bayonettings, beheadings and beatings bestowed by the Japanese captors, whose Bushido code designated prisoners as less than worthy. Unfortunately, the Japanese have never truly recognized their responsibility nor officially apologized. There is a current movement in Japan to re-write history and whitewash this chapter of the war. In point of fact, there is a movement underway to ban the film in Japan. Read this article in The Telegraph (UK). This is deeply unsatisfying. According to historian Rudolph J Rummel, in his research, “Statistics of democide: Genocide and Mass Murder since 1900 Transaction,” about 10,700 US POWs were killed by the Japanese in captivity, including my grandfather (see the Smithsonian article by Gilbert King). An appalling total of 570,000 POWs were killed in Japanese captivity — Chinese 400,000, French Indochina 30,000, Philippines 27,300, Netherlands 25,000, France 14,000, UK 13,000, UK colonies 11,000 & Australia 8,000. (Source: Wikipedia).

If you so agree, please do sign this petition to encourage the film Unbroken not to be banned in Japan. (Via Change.org)

And read the book 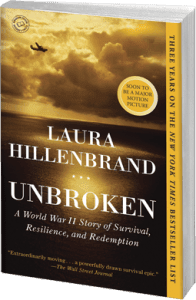 If you have not read the book, Unbroken, by Laura Hillenbrand, I most strongly recommend it. The hardcover version has been 180 consecutive weeks on the NYT best-seller list. The paperback version is now available for $9.60. It has been translated into 29 languages.