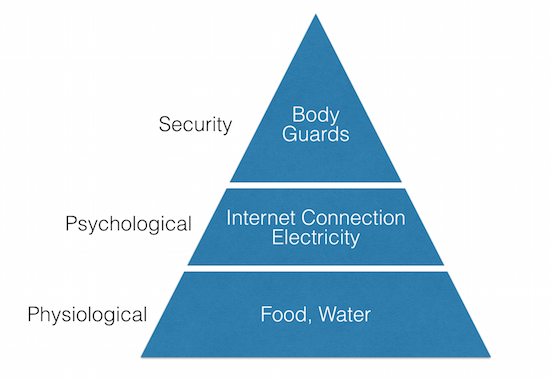 I listened yesterday to a Western photographer, whose name has been kept secret out of concern for his safety and who has been working in the government-controlled part of Deir ez-Zor, Syria, give an interview on the BBC. In the ten-minute interview, the photographer talked about living in this city, with a population of some 200,000 people, that has been under siege by ISIS. He is obviously a brave man. The conditions seem appalling and the assignment perilous. Tough as it was, however, he stressed he was living in a privileged position. He then proceeded to list what he meant by privileged. He started off by citing food, water, +2 hours of electricity per day. In addition, he said that he had access to the sole Internet connection in the city. He finally added that he was also privileged because he had bodyguard protection.

I thought the order in which he talked about his privilege to be quite revealing, no? Despite living in the heartland of the most barbaric of terrorist groups, this cameraman puts internet connection above having bodyguards! A revisiting of Maslow’s pyramid of needs may be in order?