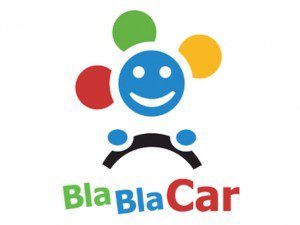 , which is a service that connects drivers and people prepared to pay to share the ride, has just received a $200 million VC injection which puts them at a $1.6B valuation (via VentureBeat). As such, it has become the top French start-up success story and is now one of the 117 ‘unicorns’ on the Fortune list of startup companies valued over $1B. Félicitations ! {A couple of weeks ago, I interviewed Thomas and Marion at Sigfox, the French start-up with the 2nd highest VC infusion ($115 million).}

As far as I am concerned, between the Uber, Airbnb, Peerby and TaskRabbit initiatives, BlaBlaCar, which was founded in 2006, is really the poster child of the sharing economy. In a speech that the founders, Frédéric Mazzella and Nicolas Brusson, made at LeWeb13, they talked about the link between Hippy Dreams and Digital Trust. Essentially, the roots and founding principles of the collaborative or sharing economy can be traced back to the hippy generation. Being a Digital DeadHead, I can only applaud and encourage the link. The fact that the heart and soul of the Internet is found in the city where you will also find Haight Ashbury, for me, has never been a surprise. 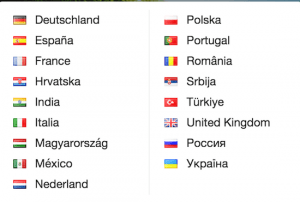 BlaBlaCar now has 20 million members in 19 countries. In 2013, they declared that had successfully coordinated 10 million rides (covering 3 billion kilometres), which is as many passengers as the Eurostar (of which I am a big fan and consumer) carries every year. In the intervening year since 2013, obviously the BlaBlaCar numbers have multiplied versus the 3% growth recorded by the Eurostar (in 2014). Like Eurostar, though, I think it’s worth noting that, as Nicolas Brusson, said:

Our currency is actually seats, not rides”

Another interesting point is that the ride-sharing trend has really been a strong European movement versus a North American phenomenon. Ridejoy, out of San Francisco, closed down in 2013. Zimride (SF) had to pivot and created the app, Lyft, before being acquired by Enterprise. One fundamental nuance has been that the companies in the US seem to focus more on carpooling, which is associated more with a regular ride (commute) and doesn’t necessarily mean long drives. The car sharing of BlaBlaCar seems to be more about irregular, one-way, inter-city (i.e. longer) rides. 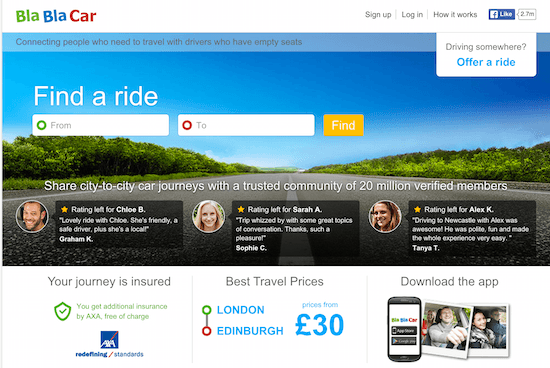 It’s the Economy in the ‘Sharing Economy’?

At the heart of the sharing economy has always, also, been an economy

. It’s not just the economics of the business model for the service provider (i.e.BlaBlaCar themselves); but the economic savings for the participants/members. The expensive nature of driving in Europe (price of petrol, toll roads) in an economically difficult economic environment has also, surely, contributed to the successful take-up among Europeans.

What is the Sharing Economy?

The sharing economy is an umbrella term that covers a wide array of “sharing” activities. As some have pointed out, the nature of some of these businesses has been more a cover for undermining other businesses, circumventing regulations and short-circuiting the tax authorities. Moreover, the ethics of the financial partners and executive teams (read: Uber) has not always been very salubrious.

As far as I am concerned, there are several reasons why BlaBlaCar is the real deal poster child of the so-called Sharing Economy, and most in line with the spirit of the Hippy Dreams:

But, the piece that I like most is that the founders are also sharing some of the secrets of their success. Not that one should ever reveal all the company secrets, but the management seem to have an appropriately open and deliberately collaborative mindset. The key element behind the collaborative economy -- and the most precious currency between the members -- is trust Click To Tweet At BlaBlaCar, they call it Being The Trustman.

DREAMS – A Framework for Trust

In a précis, here is the DREAMS Framework for the collaborative economy with which the guys at BlaBlaCar have come up. It’s all about developing bona fide trust. (You can download their DREAMS framework!)

BlaBlaCar has achieved this scale only thanks to the Internet. And, its mission seems entirely honorable. If you consider that petrol, being a scarce resource, is bound to become more expensive and that, driving while speaking on a mobile will likely become increasingly illegal, why not bum a ride or open your car up to vetted strangers? You might find you gain not just a few extra shekels and a lively conversation, but you could even end up making new friends, heaven forbid, IRL.

And the story goes on… bla bla blah…