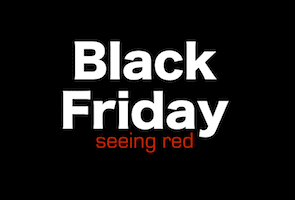 and Cyber Monday 2015 have come and gone. If they are cited as two distinct days, de facto, they have almost merged to become at least a long weekend, if not a week-long bonanza. Presumably each brand who participated will now be going over the results with a fine tooth comb. All those with heavy online selling are likely still embroiled in a logistics hangover of sorts. Some brands performed better than others. Some absolutely bombed out. So, what are the key lessons after such an onslaught of activity?

In case you aren’t aware, a little along the lines of Boxing Day the day after Christmas, Black Friday is so-called because it comes after the Thursday of US Thanksgiving. Somewhat tragically, we go seamlessly from a holiday of giving thanks to a day of grabbing screaming sales. Click To Tweet If Black Friday is essentially a US phenomenon, the sales fever has migrated across the Atlantic, at least to the UK where there were about £3.5 billion in sales over the four-day period. In the US, the five-day period from Thanksgiving through Cyber Monday amounts to a total of $12B of heavily discounted sales in stores and $11B of online sales, with an online one-day record of $2.98B on Cyber Monday alone. [It’s worth recalling that Singles Day in China (11/11) this year reached $14.3B, of which mobile accounted for 72% of purchases, up from 43% in 2014 according to the Atlantic.] 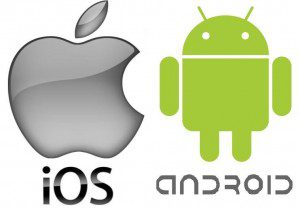 A standout component of this vivid sales period is the growth on mobile. As reported by Adobe, 33.2% of online sales during this 5-day sales orgy in the US came from mobile devices (smartphone + tablet) vs  27% last year. Yet again, despite being about even in terms of penetration in the US, Apple’s iOS totally dominated Android in mobile shopping. According to this VentureBeat article, of the $1.5B in sales that came through mobile devices on the Thursday and Friday, 72.9% were done via iOS and 26.6% via Android. The breakdown between the iPhone and iPad was 55%-45%. With these types of volumes, clearly retailers are going to have up their game to figure out who and how their (potential) customers are using the mobile devices. For example, older customers might prefer to do the buying on an iPad, younger customers might be more inclined to use the smartphone in the store to price check, etc. Sites and emails that are not truly optimized for the mobile interface are going to be severely penalized. Click To Tweet

Black Friday Sales in the inbox

As ever, email played a hugely important role during this weekend. According to Adobe, promotions via email drove 25% more sales than in 2014, so it would seem evident that Email marketing is anything but dead Click To Tweet. To wit, there was a veritable deluge in my inbox (and I’m sure many other people’s too), clamoring for my attention and promising “extraordinary” discounts. From Thanksgiving Thursday through Cyber Monday, I personally tallied over 150 emails specifically about some special sales offer, representing about 3x my usual volume of promotional emails. There was quite a variety of good, bad and indifferent. On the one hand, there were the different segments: luxury-prestige-mass. There were the different sectors: travel-fashion-furniture-distribution… And, then, in terms of what was sent, there was the frequency and timing, much less the content itself. I chose to evaluate the emails primarily for their content and their nuisance value. 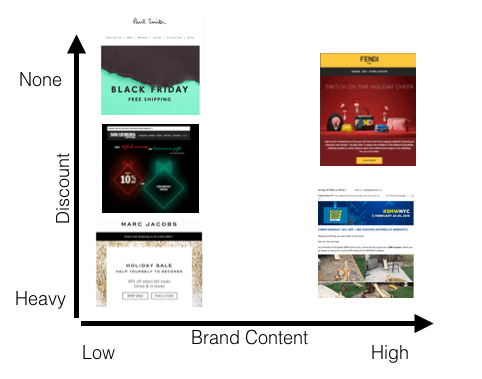 If the average discount over the Thursday & Friday was around 24% (according to Adobe), announced discounts went as high as 70% off…. Without doubt, it means a bloodbath for profits. One of the most shocking revelations was how the LUXURY brands joined the fray. Not only did many “luxury” brands send out emails, their messages were in the main bereft of branded content. If Paul Smith promoted only “free shipping,” Marc Jacobs trumpeted a 40% on Friday and then a 50% sale on Cyber Monday.

If a luxury brand has to go down the discount route, then it is, ipso facto, a failed luxury brand. Click To Tweet

If you don’t them the first time, try and try again?

Among the worst offenders, there were a couple of companies that felt that it was alright to send TEN OR MORE messages in the space of 5 days. The members-only “luxury” lifestyle site ACHICA sent 10 emails, each with a 20% discount on a different set of items. Shu Uemura (part of L’Oreal), about which I’ve written before, also sent out 10 emails, with scant difference in the layout between 8 of them, and offering a 10% discount each time. But, of all the brands on whose mailing list I am, Estee Lauder won the boobie prize, hitting me up with THIRTEEN emails. Granted there were different creatives, but on balance the red of Estee Lauder was anything but a red carpet. It is clear that such heavy spamming is totally unbecoming of brands that wish to describes themselves as luxury. Otherwise, Gilt was guilty of 9. Bonobos bombed in 8, Kerastase (also part of L’Oreal) killed it with 7. Neither Overstock nor La Redoute sent as many. The craziest thing is that, other than Gilt, there was absolutely zero effort at personalization by any of the above.

But, another altogether important signal was for those brands who chose NOT to pollute our inboxes during this busy weekend. The most important example of these is Amazon. I received not a single spam from them. And yet… as this very powerful graphic taken from a CNN screenshot (taken and tweeted by my friend Michel de Guilhermier on Thursday night) of the respective market caps year-to-date, they are clearly doing something right! And, judging by the results, Amazon was a big winner over these last five days. 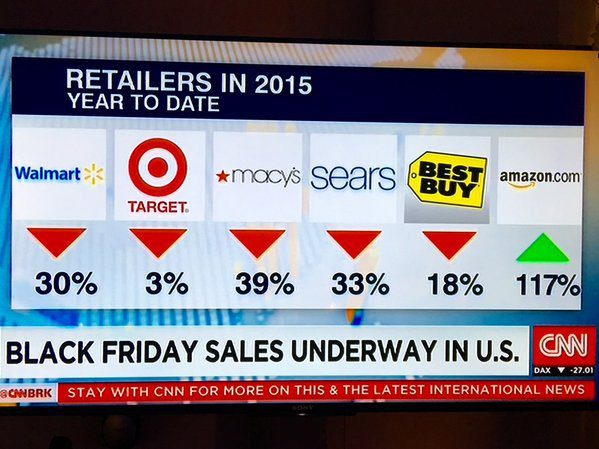 As with any retailer, there is an association with the store location (off or online) that draws people regardless of the promotional messaging. We could call this aura the retailer’s “brand,” its projected trust factor. For many people, going to Amazon has become a habit because of its trusted service, reliable pricing and sturdy surfing experience. With the massive spike in traffic, many sites crashed or slowed down to provide a completely subpar experience. Among the titans, Paypal, Target, Neiman Marcus, John Lewis (UK), Argos (UK) experienced closures. A major fail. When I went on to Amazon’s site, meanwhile, I was invited to the dedicated Black Friday space… where it was reported that they were adding new deals every five minutes on Black Friday (as opposed to every ten minutes last year). 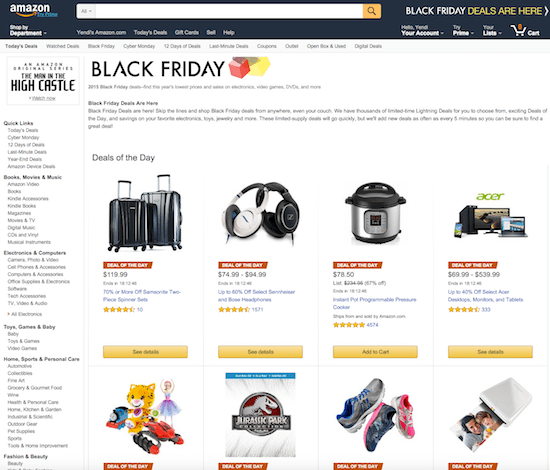 According to VentureBeat, Amazon was also the winner in terms of social media. Amazon registered “over half a million social media mentions, more than 2x Target and Walmart combined.” Could this be proof that word of mouth is more powerful than a discount? Amazon’s growth is monumental considering its size. They anticipate doing +25% in this final quarter of the year versus 2014. For the traditional brick retailers, the movement online and on the mobile continues inexorably onward, with weaker traffic and sales. As reported by RetailNext, an in-store analytics provider, traffic to physical stores was flat and sales were down 1.5% over the long weekend in the US, although other media outlets reported brick & mortar drops of more than 10%. The “challenge” for these real estate titans is how to keep defending their turf all the while upgrading their online efforts. Not only that, but they need to manage the online and offline channels in a way that makes sense for the customer all the while not killing the bottom line.

The power of the brand

Another big winner of the weekend was Apple. Not only do mobile customers seem to prefer by a large margin surfing and buying on iOS devices (see above), the sales of iOS devices continues to surge. According to this Barrons article, citing analyst Trip Chowdhry, “Apple probably had the strongest Friday sales in its entire history.” According to Chowdhry, the Apple Watch was a very popular item and the “iPad Air 2 [was] the hottest gift item for kids 8 years and older.” The tell-tale sign of the strength of the Apple brand is that it continues to avoid altogether the discount route in its stores; although it does allow its partner distributors to discount on their own dime (not that they could control that, really or legally speaking). It should go without saying, but I didn’t receive any Apple spam over these last five days.

Among all luxury brands, Louis Vuitton is not only the leader, but it refuses to discount. Even within the LVMH family, not all luxury brands adhere to the same principles. For example, Saint Laurent, Gucci and Prada operate outlets where they can siphon off outmoded items at a considerable profit. As a sign of confidence, meanwhile, it’s worth noting that Gucci’s new CEO, Marco Bizzarri, has indicated that they plan to follow the LV path of no discounting for the new creative director’s latest collections. [WSJ article].

Herewith a recap of the five urgent things that brands should take away from this latest episode of online sales.

Your thoughts and comments are welcome!