Last week, I conducted a survey and received nearly 200 responses. You can see the first post on the topic here, featuring the results across the 13 questions, each of which tackled a specific “digital” situation. For each question, the respondents were asked to rate the behaviors of how people used these digital tools. Here are some of the important points that came out of further research. First, the topline results:

Overall, the average note for first 12 questions was 6.2 / 10 (the last question was more or less posed inversely to the first), showing that on balance, these habits were definitely more unacceptable than acceptable. 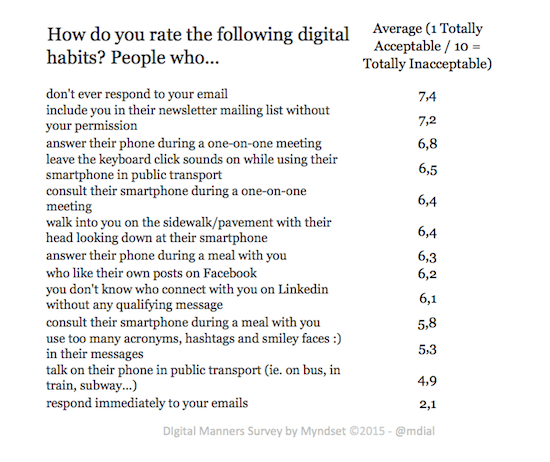 Taken together, one can clearly see that people take their email rather seriously! Email is the most sensitive topic. A majority find that a lack of response to one’s email borderline rude; while being immediately responsive is considered very much appropriate (N.B. I note that 13% considered immediate response unacceptable, these voting top 3 boxes, i.e. 8-10). This last question (“respond immediately to your emails”) was posed in light of those who look askance at people who tend to spend too much time on emails, etc.

Taken together, there is a decidedly poor reception when the other person at the meeting or at the dining table looks at or answers the phone. From observation, when one caves in to the temptation once, the proverbial seat belt is undone and the phone sits on the table rather than going back to where it belongs — out of site.

The third class of questions concerned digital etiquette in public (transport or in the streets).

Taken as whole, the way people use the mobile in public places could certainly be a cause for strife.

The last category of questions revolved around social media. Naturally, as above, this was not a definitive list. I had one question specifically about Facebook and another on LinkedIn.

Taken together, the faux pas in social media are considered less offensive overall.

Please let me know any questions or thoughts you might have as a result! And I hope that you will be keen to help improve our digital etiquette! We need to lead by example, starting with myself!