I was invited to attend a press meeting to announce a repositioning of sorts of Relaxnews, run by Jerome and Pierre Doncieux, that was purchased by Publicis in July 2015. Relaxnews is setting itself out to be a press agency, including consultancy, production (of content) and technology. The new slogan is: “Relaxnews, your Editorializer.” With Publicis CEO, Maurice Levy, on hand to insist on the Group’s burgeoning desire to own its content (the “owned first” strategy), the meeting highlighted the 3-way partnership between Publicis, the Agence Française de la Presse (AFP) and RelaxNews. The underlying principle of the partnership is called the AFP Relaxnews Publicis integrated content model. The crystallization of this partnership was the launch of the AFP ticker feed in the Publicis Drugstore.

If I may start with the good news, the idea of a communications or ad agency hooking up with a news organization (AFP) and a distribution mechanism (relaxnews) makes sense as a value-added service for certain brands. After all, the hunt for great, curated content is on. Making that news relevant and timely for the specific requirements of a company will be the determinant of success.

AFP’s CEO Emmanuel Hoog gave a rundown of his group’s figures. Founded in 1944 in the offices of Havas after the liberation of Paris, AFP is the world’s third largest global news agency, behind AP and Reuters.  The group boasts 1,575 journalists in 200 offices throughout 150 countries. The AFP is keen to promote its international orientation (compared to the competitors), with employees coming from 80 nationalities. One of the interesting items from Hoog’s presentation was the intention for the AFP to carve out a specialization, as opposed to being a generalist news provider. The area of predilection for the AFP is sports, where it claims to be the world leader for sports coverage (in 6 languages) and in sports photography. Considering the emotional content of sports, there could be strong benefits for a brand, if aligned with its objectives and voice.

Presentation – When the form rises to the surface

Meanwhile, as far as a press “conference” was concerned, I had to marvel at the communications aspect. The one-hour seance featured a rotation of introductory speeches from the various CEOs, replete with commentaries about the bad weather. The first two rows of seats in this rather small room were filled with the speakers. I note that I found a spot in the third row. It was at this point that I zeroed in on the slides (see below). 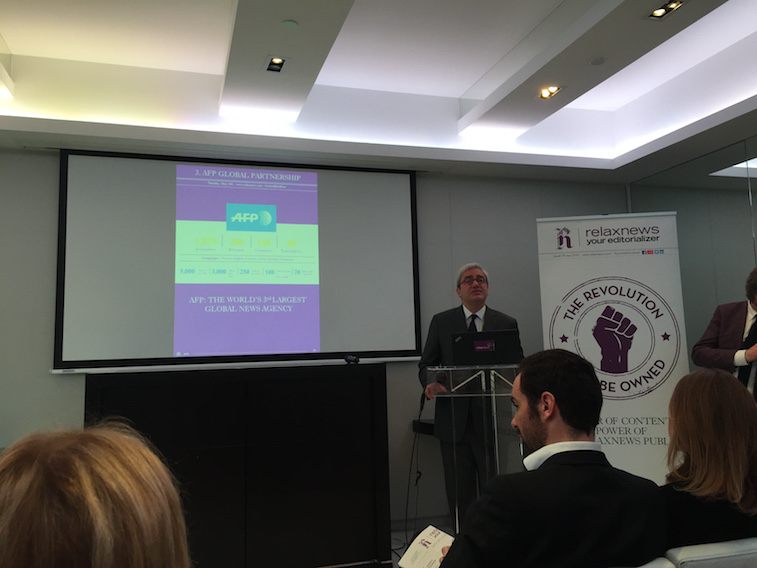 Is there anything you notice?

From the third row (the first available row for the guests), I had to squint hard to read anything. Was it truly possible that they preferred the book format (portrait) and to eschew the real estate on either side of the screen? The size of the text on the screen was bad enough if it were not also for the fact that they used a blown-out yellow. 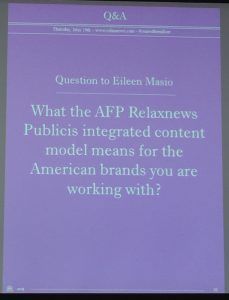 Once the formal presentations had been wrapped up, it was time for questions. In a world of real-time news, it struck me as remarkable that the next phase of the conference should be pre-set, tele-guided questions that were planted on the screen and directed to a single person (see left). Talk about spontaneity.

After the two pre-planned questions and answers, the attendees were invited to ask their questions.

Ironically, there was not a single question to be had. The inevitable conclusion was the speakers had been especially clear?

Surely a factor of success for a press conference is the level of engagement of the audience and the interest in the topic? 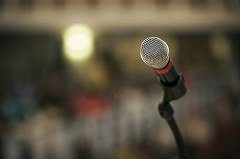 After the conference, about half of us trooped down for the inauguration of the ticker in the Publicis Drugstore. We were postponed by two things: (1) the tardy arrival of the CEO and (2) a nasty sound issue. Nothing like prepping the tech.

Were this a presentation coming from some major industrial company, I might have understood the communication style and pattern. But, from a communications agency, it looked very much like the poorly cobbled cobbler.

In a world of branding, in today’s transparent and real-time existence, every occasion is a way to make your brand come alive. A presentation made by the CEO is a great way to express the brand and the corporate culture… or not.