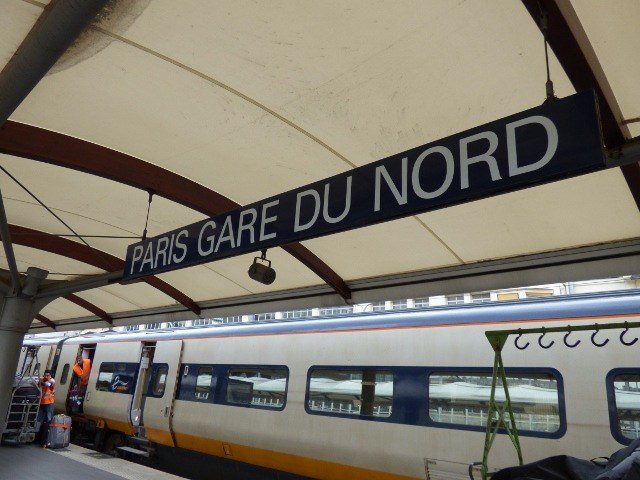 If being “customer centric” is still being bandied about in boardrooms around the world, the reality is that most companies struggle to marry the mindset of “the customer is always right” with the quest for optimal profits. One of the ways to help galvanise an organization around the customer is to consider the customer journey.

In this multi-variate world, where everyone is expecting individual attention, all the time, every time, achieving customer satisfaction can be awfully elusive. A tool that can help render the solution more concrete and parse out the different priorities is to craft a series of customer journeys for designated clients. Click To Tweet That means, not just getting into the customer’s shoes, but figuring out his/her context and connectivity. It still seems early days for most companies in their quest to become ‘omnichannel’ and genuinely customer centric.

Journey in the Journey

It came as deep irony I thought that Eurostar, an enterprise dedicated to providing journeys for its customers, would fail so dismally in its effort to “improve” the customer journey at the Gare du Nord. Last Saturday, they opened with much fanfare the new Carte Blanche / Business lounge in Paris. For several years, the facilities at Gare du Nord have been ignominiously behind those at its “sister” station in London, St Pancras. That includes the station itself, the shopping choice as well as the entire Eurostar zone. 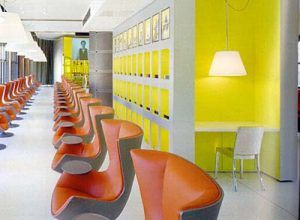 In this post, I wanted to explore their vaunted new lounge. Let’s start with the problem of the previous lounge. It was located at the very end of the floor, which wouldn’t necessarily have been so bad if you hadn’t had to fight with large amalgamations of people milling around in a rather squalid waiting area. The old lounge itself was all in in length (see right), with a second floor that could only be accessed by a spiral staircase in the centre of the lounge. The toilet was downstairs (again no lift). The views out the window were plain (either on the escalators going down to the quay or the back end of the station. When you came at “crunch” time (e.g Monday am or Friday pm), the lounge was always busting at the seams with busy-ness passengers. Some of the personnel were kind. Otherwise, the lounge was a wholly average experience, certainly compared to standard airline lounges. And was well below the St Pancras experience.

The new Gare du Nord Eurostar Business Lounge is certainly more “beautiful” than the previous one. When I visited earlier this week, it being one of the first days of opening, an entire Eurostar crew came to marvel and take photos. Located on the second floor, near the entrance, there is a lift. 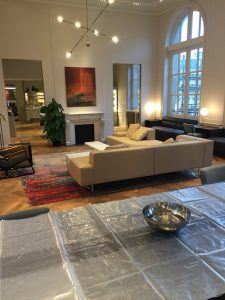 The reception is clean and then the main hall is decked with tall ceilings. The entire space is large, aerated with plenty of coves. Other things I liked: there are UK and FR plugs by virtually every chair, as well as many recharging pads for mobile phones. The food bar is far more inviting (with no change in the selection except for a lack of water bottles). In terms of teething pains, however, there was a huge leak that greeted us upon arrival (see the silver bowl on the table, left). Just a temporary problem, one imagines. A bigger problem: the wifi failed to work…at all. That’s a huge no-no in my mind. It’s not just an anecdote! When I signaled this to the staff, they said that they were aware already and that it was a case of “we’ll report that, Sir.” Surely, this will be fixed once they figure out the technical issue (I suspect a lack of sufficient routers?). It used to be that no wifi was just a small issue. But now providing wifi is quite as elemental as providing refreshments in such a lounge Click To Tweet How can they not have planned that in advance?

Customer Experience – In the details 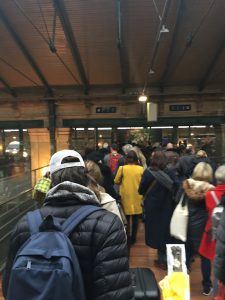 The biggest downer, however, came at the end. With 25 minutes before departure, we were informed that boarding was “immediate.” And with good reason. We had a rather long walk to the main boarding entrance, including waiting for a congested lift, and thence to gain access to the quay. Worse still, we were absolutely last in queue (see the photo to right). Any pleasure buzz evaporated entirely.

The mindset of being customer centric

This brings up another “challenge” in customer journey planning (notably at Gare du Nord). At the front of the Eurostar station, relative to the ticket, passport and security controls, the Gare du Nord ‘team’ has taken years to get a reasonable process sorted out for Business Class travelers to get through quickly. Except the fact that there never appear to be enough personnel manning the booths, they have finally managed to sort out the lines to a reasonable degree (although nothing like in London) and it’s been forever “under works.” But for years, the French authorities refused to accept a differentiated queue, out of principle, I was reliably informed.

Had the executives in charge at Eurostar put on their customers’ shoes and thought like a business class traveller, it would have been a quick study as to how this new configuration was not going to work. Instead of having rejoicing customers, they have yet again managed to bungle the process and muddy the customer journey.

Executives need to get out of their offices and intellectual (even budgetary exercises) to walk in their customers' shoes Click To Tweet as if they were customers (including the type of equipment and challenges they might have). And it’s not like they haven’t had the opportunity to learn the lesson before. That’s how they developed new “innovative” trains that are a deterioration of service for the customer. See my prior post about the “new”  Eurostar e320 here. Welcome to the customer journey.

Your comments are welcome!

Having come back to the lounge on another trip, I can now say that several of the nuisances I cited above have actually been fixed. The wifi was working well, throughout the lounge. The hole in the roof has been fixed and they have instituted a special line for Carte Blanche holders. Now if only Eurostar would be so good as to provide a viable wifi in the train!