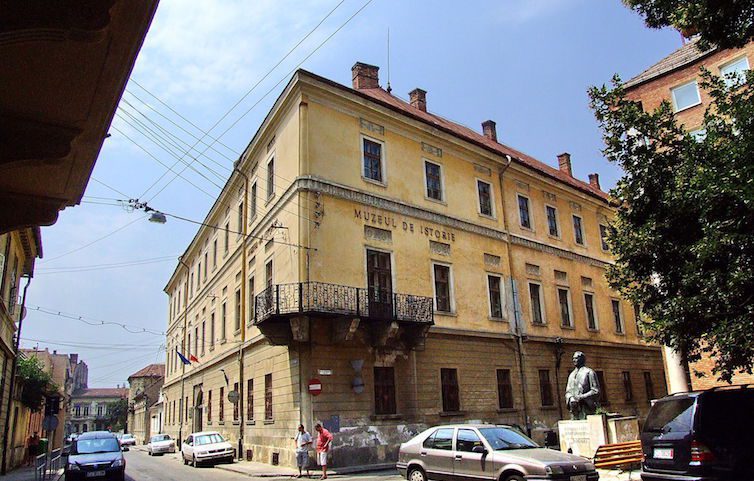 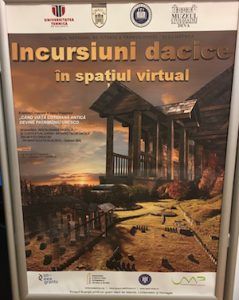 I should have known that Cluj, the second largest city in Romania, was going to provide a few digital surprises. And it didn’t fail me. First off, the entrepreneurial driver from the airport immediately volunteered to tether Internet access through his own mobile data — without my even thinking about it. That was most kind and a first for any taxi driver I’ve ever taken. Secondly, it’s clear Cluj — and Romania in general — have great high-speed Internet access. Because of the famous technological leapfrog, their 4G and fiber infrastructure make it a top ten connected country in the world, in a league with countries like South Korea, Scandinavia and Hong Kong. (See DoTheTest) Meanwhile, both UK and US peak internet speeds lag woefully behind. Thirdly, Cluj has 40,000 people working in IT out of a population of just 330,000 (in other words, a huge proportion of the available workforce).

At the same time, Romania is also home to the world’s hub of online stealth, most notably out of the leafy town of Râmnicu Vâlcea, nicknamed “Hackerville.” While attending the TeComm Conference 2017, where I keynoted on how to Futureproof eCommerce sites, I skipped out to make a cultural visit and was entirely surprised by the digital experience at the  National Museum of Transylvanian History. 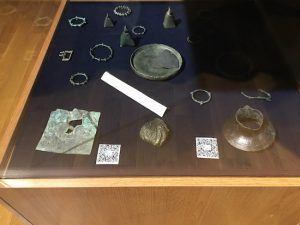 While QR codes are generally considered a marginal technology, they were broadly present at the museum, including within the displays. Getting a read on them was a bit awkward, especially when they were down by your feet… It might have been optimal to have them available at chest level, affixed on the outside of the case?

It was, all the same, quite the statement of modernity mixed in with antiquity. 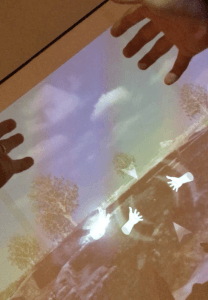 There were two variations of motion detection interactions. The first was on a rather large scale (entire wall) and it was an immersive experience that involved a gamified treasure hunt. You essentially have to go find three objects among the ruins, and after you pick them up, you get to hear about the artefact in hand. I tried to film the experience, but the motion detection required both hands and you had to turn the body in order to instruct the software. As a result, my film efforts were rather unsuccessful. If you’d like to see it, you can check out the film I’ve uploaded onto YouTube here. What I can say is that my efforts gathered quite a crowd that happened to walk in in the middle of my journey. I’m not sure if it was stage fright or the fact that I hadn’t taken of my coat and hat, but by the end of the 3+ minutes, I was actually sweating. Quite unexpected. As for a better understanding of the objects I found, I was barely able to focus on what the machine was telling me.

The second motion detection experience one was far less complex, involving using your hands to pick one object out of a line of objects on either side of the screen and then to use your hands to inspect via a 360 degree inspection. I snapped a quick picture of a lady, clearly intent on figuring out how it worked as much as (more than?) learning about the object “in hand.” I noted that this lady had her tongue sticking out, a signal of her concerted effort I believe! 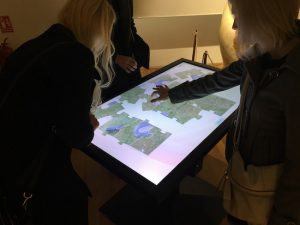 I found a group of three women working together to complete a digital jigsaw puzzle for a ruins site. I didn’t check to see if there were other games on offer on this terminal, but the group component of this was what struck me. Not sure if they learned anything though. For digital native kids, meanwhile, it seemed rather primitive. Given the height of the terminal, the kids most likely to consider this as novel might not be able to reach as high. 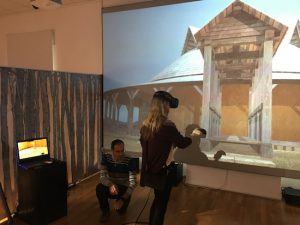 I’ve probably done over 50 VR experiences by now, so my level of exigency is certainly different from a neophyte. I watched someone go through it first, then I took on the mantle. I donned the VR helmet and a controller on each hand. On top of the controller you have a button to leap forward. Underneath, you have the ability to move your virtual fingers in order to grip. Throughout, the patient man in charge knelt down below to make sure I didn’t trip on the wire and gave the occasional guidance. You have a few objects to find within the site (a Dacian building) and you can pick them and place on small ledges or pedestals.

To be clear, it’s a very first degree experience. For sure, it’s immersive, but the storyline is decidedly empty. Moreover, very quickly you bump into the outer extremities of the environment. Overall, the educational component is quite entirely lost on you without any earphones. 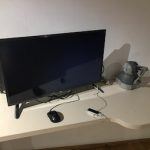 As with any digital experience, there are often bugs. In a corner, my trained eye found a terminal that was defunct, clearly the victim of a malfunction. I’m not sure what it held, but I suspect some kind of point, drag and drop discovery game. Who knows? What one does know is that for any digital experience, one should always expect bugs and create contingency plans. I’ve seen this again and again in retail digital experiences.

Overall, for a museum, I have to say that the experience was entirely novel. I was delighted by the efforts, and, if nothing else, had the chance to interact with numerous other strangers at the museum. Yes, as you can imagine, I would score the different games as pure gimmick. However, if they are able to leverage some social / media attention around it, maybe they can increase their traffic? And, at 6 lei (1.50E) for the entrance fee, I can say that I got much more for my money than I had bargained for.