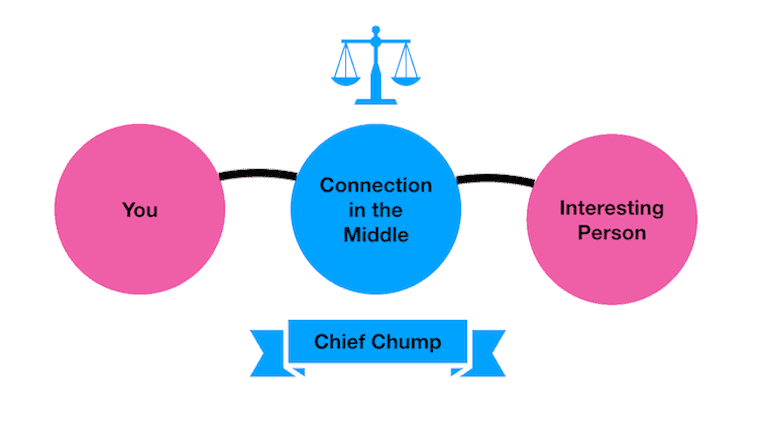 I have to guess that, since you’re reading this post, you’re on LinkedIn? I also imagine that, like me, you wonder how worthwhile your LinkedIn network actually is? Maybe you have garnered a rather large network and you battle with the quandary of accepting or not new invitations? The problem: is LinkedIn working for you? Is your network on LinkedIn a fitting reflection of who you are? Is it a network you can rely on? Is it a trustworthy selection of the best of your business-related acquaintances? Do you know why/how you are connected with each member?

If the answer to any of the questions is no, then we surely have work to do. 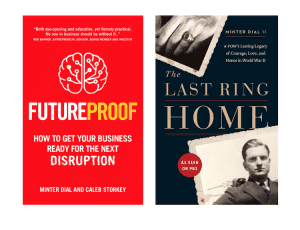 Futureproof and The Last Ring Home

Over the past twelve months, if you haven’t noticed, I have been in a deep production mode. In that window, I released a film and published two books (The Last Ring Home and Futureproof). This led me to organize around 60 events, specifically to screen my film and/or do book readings. Over that time, I’ve done events in nineteen cities in four countries. In so doing, as any author knows, you end up having to push like a madman to get your friends and family to support you, to put “bums in seats” and to sell books. I note that it’s quite ungratifying that, after completing a book, you need to flog it, too. Anyway, as a result, I’ve had to use my various “social” networks to help push and promote. Many of you may have been on the receiving end of my multiple missives. For the most part, my communications were via group emails or posts on Facebook, LinkedIn, Google+ and Twitter. I also resorted to the occasional burst of individualized, personal messages, whether via email, LinkedIn or Facebook Messenger. Without doubt, the personal messages would get the biggest responses. Surprisingly, though, many recipients of these individualized messages — many of whom I know very well — never replied. This got me thinking… 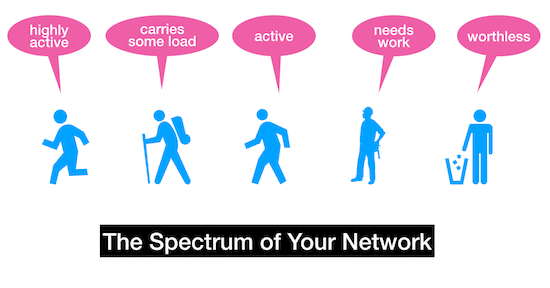 Who’s reliable in my network? Who are the linchpins and who are the deadweights? From right to left, maybe I should start classifying my Linkedin network? After all, surely it would be better to have a smaller strong group than a diffuse and unreliable large group of connections?

Vanity might push us to push for / accept many invitations, but a LinkedIn network is only as good as it is active.

You Are Your Network 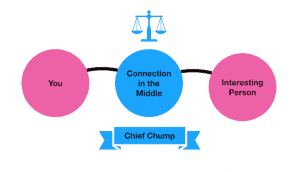 What good is a connection if he/she doesn’t ever respond to your personal message? If you go to the effort to write something specifically to them, but they don’t react, I have to believe they don’t represent any value. Perhaps they’re too busy. Perhaps they are overloaded with messages. Perhaps they feel that they’ve got other things to do with their time. Of course, it’s always possible that my solicitation was too irksome! But in any event, if you can’t reach out to your network for a favor, a question, advice or just to see if there’s a heartbeat on the other end, it certainly gives pause to think. In light of the number of non-responses for individual messages I have sent out over the last year — essentially asking people in geographic locations, if they’d like to attend the screening of my documentary film — I have come to believe that a good cull would be worthwhile. It’s not as if the large number of connections is a sign of any importance. The only benefit on LinkedIn of having a large network is sometimes being identified as a second-tier connection with other interesting individuals. But, if the person linking you is a dud (aka “Chief Chump”), I would tend to believe the person on the other side of the link thinks so, too.

Here’s my bottom line: A strong LinkedIn network means having individuals with whom are active. They engage with you, will ask questions or share ideas/posts. They might ask you for a service from time to time, but in general they are happy to respond, like and comment with you. Otherwise, what worth are they other than a node on some computer map.

If you can’t bother to reply to your connection’s private messages, then you’re not worth being connected to! #linkedinnetwork

My request to @LinkedIn: help each of us to identify the active people in your network. I’d ideally like to be able to identify automatically those people who never replied to any message you’ve sent out. That way you can choose to eliminate deadwood.