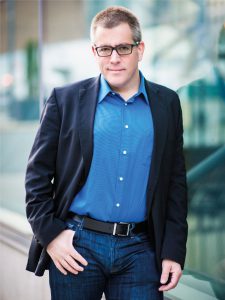 Peter Shankman is the author of 5 books, angel investor and speaker with a talent for provoking and driving fresh perspectives in marketing, storytelling, PR and communications. Having started his career at AOL, he pioneered in helping to found the AOL Newsroom. He is best known for founding Help a Reporter Out (HARO) in 2008, a precious resource for journalists that was acquired by Cision in 2010. In this conversation, we talk about marketing, the use of technology to promote your brand, the role of influencers, storytelling and data to drive your marketing.

Below, you’ll find the show notes and, of course, you are invited to comment. If you liked the podcast, please take a moment to go over to iTunes to rate the podcast.

Meanwhile, you can find my other interviews on the Minter Dialogue Radio Show in this podcast tab, on Buzzsprout or via iTunes. Please don’t be shy about rating this podcast on iTunes here!

Music credit: The jingle at the beginning of the show is courtesy of my friend, Pierre Journel, author of the Guitar Channel. And, the new sign off music is “Finger Paint,” written and performed by Josh Saxe, produced by Chase Geiser. Here’s a link on iTunes. I invite you to take a spin on Pierre’s podcast or listen to more of Josh’s music!