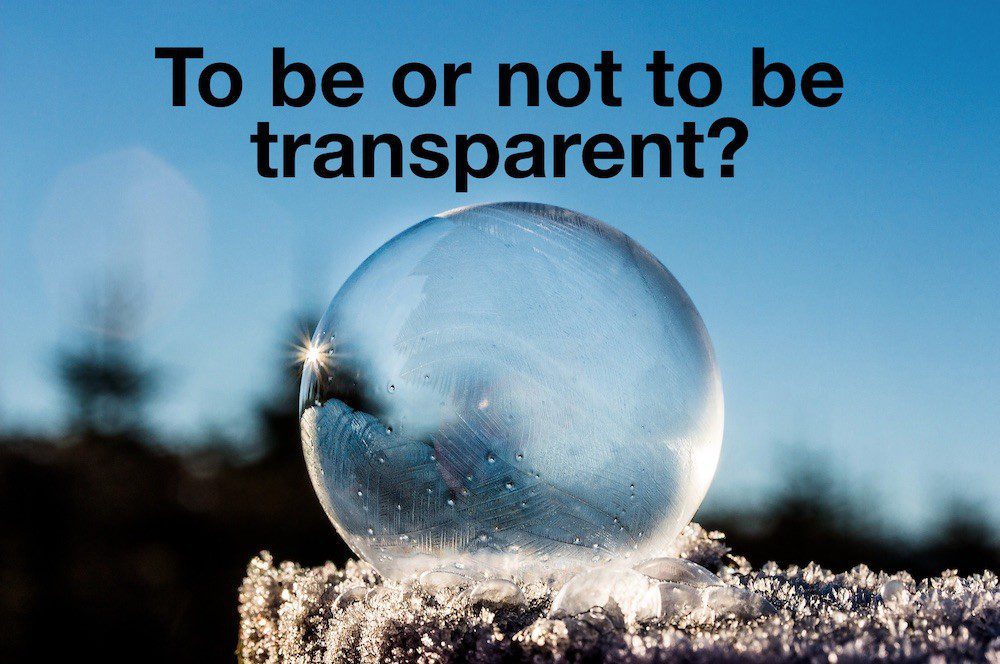 It seems like not a day passes without hearing someone, somewhere give a call for greater transparency. But is it a good idea? One friend of mine laid out the belief that transparency is the end of hope. To the extent life is tough and humanity might be evil at its core, without transparency we can at least hope that a brighter day will come one day. Similarly, one could say that transparency can be the end of love, whereby a relationship is denuded of all mystery. Yet, there is also a deficit of trust in this world. If you feel the need to keep your cards close to your chest, it’s that you have something in your hand that you would rather not let the world know. Is it that you don’t trust what others will do with that information or that, by keeping your cards confidential, it gives you leverage? In both cases, the sensible thing to do would seem to be to keep your cards undisclosed to the others. In any event, we’ve all got things that need to be kept secretive. Some of which might be of a darker calibre. Moreover, you’d have to be an idealistic puritan to believe that we are ever 100% good all the time with everyone. So, how much transparency should we seek or want?

The link between transparency and trust

In the wake of the tragic shooting down of the civilian airplane in Iran, there was an overt call from Canadian President Trudeau to the Iranian authorities to have transparency about the information surrounding event. In general, greater transparency is a way to sow greater trust. Other than a more or less ‘righteous’ call for transparency, the implicit if not explicit issue of being cagey and withholding information is one of trust. When you hold back information, it’s often leaves the feeling that you’re not being truthful. In reverse of the notion of innocent until proven guilty, it’s untrustworthy until proven transparent. Many of the older generations were brought up in an era where holding back information was synonymous with retaining power. The luxury industry has generally powered its margin based on a veil of obscurity. Moreover, the French upper classes have long sung the refrain that to live happily is to live hidden. Small wonder there is little trust in France of the upper establishment.

The human condition… is secretive?

Secretive associations — like the Secret Societies at my alma mater (Yale) or the Freemasons — that breed equal parts jealousy and curiosity for the non-included, are fertile and powerful networking groups. If the current trend (and call) for more transparency continues, will all that is secret and guarded eventually need to be aired? Or is being secretive somehow a part of our human condition? After all, we all have our secret gardens and intimate details that one must hold close to one’s chest if you don’t want to be ridiculed.

In the news, we continue to see things being exposed in business that the executives would surely have rather kept under wraps. Between the hackers, investigative journalists and rogue employees, what happens in Vegas is increasingly not staying in Vegas. Whether it’s unethical activities, intellectual property or the nature of your network, in today’s world, what and who you know is now dramatically easier to root out.

So, what’s left to keep secret?

The strategy in secrecy

Business executives would do well to ponder this last question. Between intellectual property, confidential memoranda or activities that could have a material impact on share price, there is plenty that must imperatively remain private. But, companies fail to parse those strategic elements out and, for fear of letting out confidential information, end up protecting much more. If only the truly strategic items could be explicitly identified, not only will the efforts necessary to keep them secret be less imposing, you’ll lift a pall of obscurity that harbours an unnecessary amount of data, provide greater transparency and help to foster trust that is vital in the establishment of partnerships. Companies — not to mention governing institutions — that prefer to hide behind the veil of secrecy will be a constant target. It’s almost a call to be hacked. And, when (not if) that company runs into a challenging situation, the chances are that any less ethical activities risk being exposed. So, the trend to transparency requires that we not only reflect on that which is strategic to keep secret, but it also should help focus one’s attention on unethical practices and behaviours. As a leader, especially in industries where the reputation is poor and trust is low (read: financial services, pharmaceutical, tobacco, entertainment….), this should be one of your obsessions.