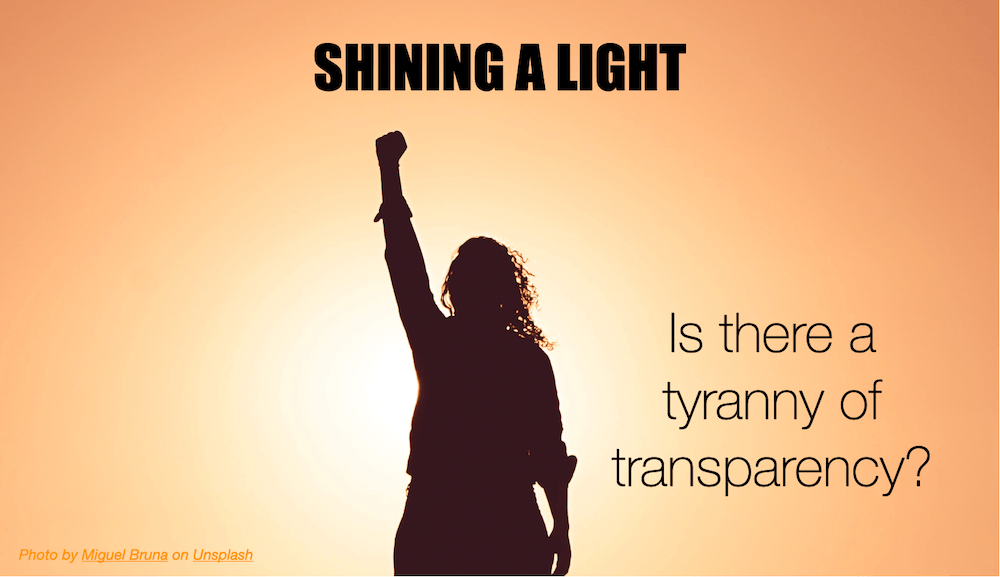 With the publication of my new book, I’ve been very dialled into the notion of transparency. It’s a word that is hashtagged a lot on Twitter. Articles abound on how transparency leads to trust. But is transparency all it’s cracked up to be? Is it truly a useful — if abstract — concept? In a research paper, “The Tyranny of Transparency,” penned in 2000 by Marilyn Strathern, she draws out the link between accountability and transparency and the quest to make apparent the invisible. Are we thus embarking on a road that will lead to a tyranny of transparency where everything must be exposed? Whether it is a person or organization that is secretive or that has something to hide versus those demanding fuller transparency, there is an inherent power struggle. As Strathern points out, “there is nothing innocent about making the invisible visible.”

In a workshop session I attended that was held in French and run by my friend, Alex Beaussier at SBT-Human(s), where I was accompanied in the panel by an art historian (Pauline Pons), a doctor of psychology (Sandrine Bélier) and an ex-journalist (Benoît Quémar), we discussed the role of transparency in leadership. It was a highly interactive and engaging session. Below is a truncated version of the image, making visible part of our exchange (N.B. the paradox). In discussing the abstract concept of transparency, it’s valuable to make our conversation more tangible.

The bottom line was that there are many ways to skin the transparency cat. For starters, many of us have different definitions of what is transparency (encouraged through the different profiles on the panel); but more importantly, there are plenty of countervailing opinions about just how much and where to have transparency in leadership and in business more globally speaking. Among other thoughts, there is a belief that the calls for transparency are deeply political. For example, as Pauline Pons highlighted, in 1851, the building of the Crystal Palace in London was a political statement, as if England were saying: see right through into the power of our nation.

Transparency as a value?

On the Your Undivided Attention podcast interview by Tristan Harris with Jonathan Haidt, the acclaimed social psychologist and author, Haidt discussed the Moral Foundation principles that he and a group of academics created, where subsequent study and the current narrative, has focused on the political edge of ethics and morality. One of the six principles is Sanctity/degradation. To quote the Moral Foundations’ site:

This [Sanctity/Degradation] foundation was shaped by the psychology of disgust and contamination. It underlies religious notions of striving to live in an elevated, less carnal, more noble way. It underlies the widespread idea that the body is a temple which can be desecrated by immoral activities and contaminants (an idea not unique to religious traditions).

It’s a foundation that is nominally designed to help our civilization fight the “pathogens and parasites,” terms that have taken on much greater meaning in the last twelve pandemic-strewn months. Moving from the sensation of wanting to avoid contamination and impurities, it’s extended into a sense of disgust “to certain people, groups, symbols or ideas with any potential to contaminate our moral communities.” After all, in nature, water that is pure is necessarily transparent.

When Jeremy Bentham created his panopticon prison concept, the principle was that if you — as an inmate — knew you could always be seen, you would behave properly. By shining a light on and making everything and everyone visible, the transparency was controlling. Transparency is frequently deemed a desirable trait. But, to what extent is it always a worthy goal or value?

Certain sociologists have equated Haidt’s principle of sanctity to an infatuation with precaution. As Haidt describes it, there is underneath this principle a search for purity. But who’s to decide what is the right level of purity? Transparency is nothing if not a step-cousin of purity. It is a window to within. But not everything needs to be seen. Some things are better left unsaid. From a governance standpoint, some things must be left unsaid. Not everything underneath the kimono needs to be on full display. As I like to say, there is beauty in mystery. And we all have — and must cultivate — our secret garden as part of understanding ourselves fully.

Enlighten me with transparency

There is an almost transcendental, uplifting and globally accepted notion behind the Enlightenment. In that golden era of the 17th and 18th centuries, there was a feeling of illumination, an elevation of the human spirit, an awakening of the intellect and reason, and a heightening of our abilities. The traditions and authority of the monarchy and the Church were questioned, and link between Church and State weakened, if not separated. Governing bodies and institutions were being held more accountable. As Strathern posits, transparency can shine a light on accountability. But is shining a light on all the hidden and opaque aspects of our lives and society a good thing? It depends on who’s holding the light.

So, it feels like there are many angles to transparency. And, when you measure the discourse and cries for transparency, the question remains: how much, where and when is transparency needed? And as leaders, how transparent and genuinely authentic can you be, when we know how difficult it is to be self-aware enough to thoroughly know oneself? As Benoît Quémar said, as a leader, a good question you can ask is: What does transparency mean for your organization?

I’ve created a survey whose purpose is to understand better our attitudes toward transparency. Please take the 6 minutes to fill it in. I’d be delighted if you’d share it about with your network too. By filling in the survey, you have a chance to win a free and signed copy of my book. Also, you’ll get preview access to the results. 👉👉 Click here via SurveyMonkey. And if you speak French or know some franchophone friend, it’s also en français here 🇫🇷..

Please leave your comments and reactions!