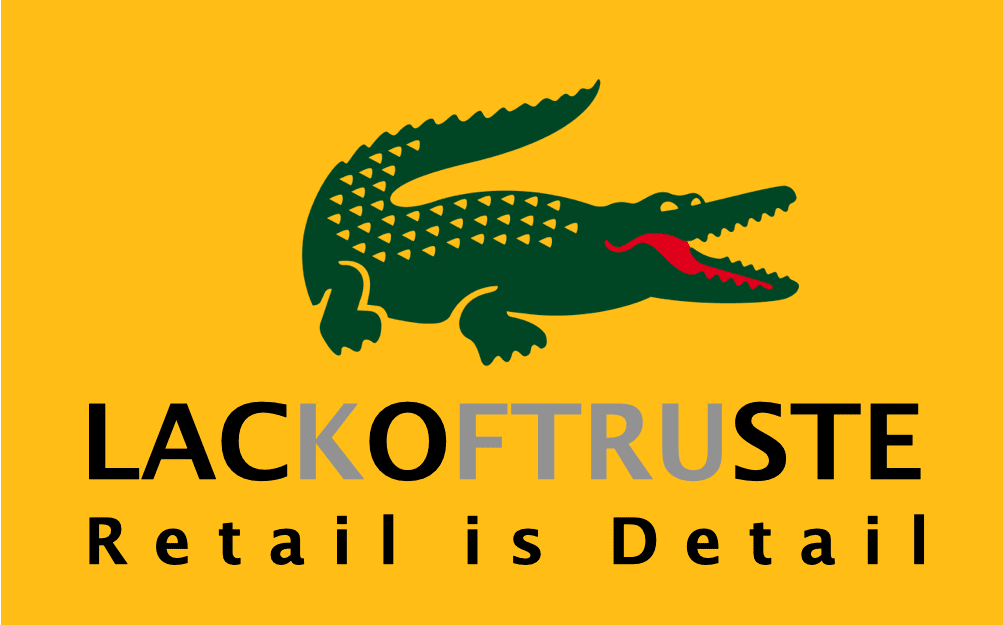 Over the Christmas period, I went to visit the mall in Towson, Maryland (USA). Outside of having difficulty in actually finding bona fide tennis shoes at several dedicated sports shoes stores (you can find all manner of fancy “running” and basketball shoes), I also went to visit the Lacoste store, a vintage sports brand that remains rather classical in style.

While one of the two Lacoste staff was entirely amenable, I was confused, not to say upset when I was told that neither of the two shirts (one black, one white) I had selected were on sale. This was despite having been chosen from the following shelving display:

I don’t know about you, but as I scanned the display, I had spotted the “SALE 30%” pretty clearly. Funnily enough, I didn’t read the small print, which I think you’ll agree is quite small. Here’s a zoom in:

It turns out that “EXCLUSIONS APPLY” means that certain colours are excluded from the promotion. So, after having been told about these exclusions, that were unfortunately applied to the two colours I’d chosen, I went back to the rack to explore further.

Below I have colour-coded the “exclusions,” showing the colours/models which were excluded from the sale. I wasn’t amused.

The stacks circled in pink are marked with a sign: “EXCLUSIONS APPLY”. Of the 41 stacks of Lacoste shirts on these shelves, there were 11 that had the sign. However, there were NINE other stacks (circled in green) that should have had the same “EXCLUSIONS APPLY” sign on them. In other words, 20 of the 41 stacks were excluded. That’s half of the stacks on display. In my books, that’s outright deception. Technically, I might have been able to scream about how there were white and black shirts on display that didn’t have the exclusionary sign. However, the woman at the till basically just shrugged it off and said something to the effect that “our regular customers know the difference.” I know that fidelity has its privileges, but that didn’t seem right. A better posture might have been to at least acknowledge why I might have been upset. Furthermore, had she accorded me the sale price, I’d have gone on without raising such a stink. Now, I’ve lost any love of Lacoste that might have remained. A lost opportunity, I’d say.

Retail is in the detail

It’s not because we’re in lockdown that retail stores can get away with such low-level trickery or amateur merchandising. Especially since there is diminished foot traffic, you’d expect that the staff on hand have time to check on any errors on the shelves. Moreover, in a higher end store, selling expensive shirts (> $85 for the polos), they should take even more care. I have no sympathy for stores or brands that are looking to use deceitful ways to drive sales. When I tweeted to Lacoste, naturally I got no response either. So much for customer service.

I hope that Réné (Lacoste) is rolling in his grave. Retailers need to find better ways to engage with customers, enchant them with displays and customer service and create more memorable experiences, especially since it takes effort and time to go to the store versus typing on a keyboard.

I’m always on the lookout for retail successes and novel retail experiences, so please note any in the comments if you would like to share!