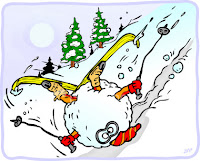 What kind of backwater Put[r]in-ification allowed the Winter Olympics 2014 to be ‘offered’ to the backwoods–not to say backwards–town of Sochi? With a minuscule 7km of slopes, this is truly Putin’s backyard ski resort. A day of portent, the selection was announced on July 4th. Beating out the last two competitive bids of South Korea’s Pyeongchang and Austria’s Salzburg, you have to wonder what was the quid pro quo that would endorse the anti-democratic, amoral Putin regime. Was it the fact that he actually deigned to speak in French and English–by some reports, it was merely his presence in Guatemala (where the IOC met) that made the difference [of 4 votes]. Presumably he made some back pocket deals. No different from the 1980 Summer Olympics award to the then-USSR Moscow–boycotted by the US because of the Soviet invasion of Afghanistan–this selection smacks of sportolitics: politics in the highest order. I totally applaud Russian winter sport prowess and they surely should, at some time, host the Winter Olympics, but timing is everything. I am left wondering what might have happened had Putin lost.* Was it to gain Russian support of the US invasion/occupation/imbroglio in Iraq or more broadly for some concession with regards to US Middle Eastern policy? If 1980 was followed by glasnost, 2014 may be followed by glasshouse: a retrospective and transparent view of the malevolent, iron-fisted Putin legacy. A golden day for the Black Sea, A black day for the Free.

*When Athens lost the 2000 Summer Olympics bid, the country went on strike. Had Putin lost, Russia might just have closed down all ‘free’ media and killed the remaining independent journalists. After this vote of approval, he may feel the liberty to do so unsanctioned.