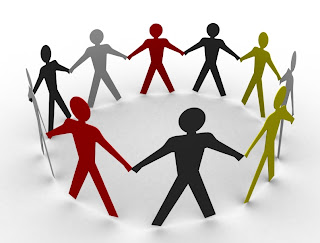 Facebook, Blackberry, LinkedIn, Viadeo, Hotmail, Twitter, Plaxo, Jaiku, Bloglight.ning, del.icio.us and so on … the options for getting in touch are spreading rampantly. There is, on the one hand, a convergence and agglomeration of sites and, on the other, a massive divergence in terms of electronic communications. This latter consideration has now hit me frontally and seems to be winning out. Okay, it has been a few weeks already, but the daily

onslaught of new friends and notifications on Facebook (FB) has basically slapped me in the Face.

Whereas I thought that a service like Netvibes was going to centralize and rationalize my (first, not second) life, the matinal “you’ve got mail” [for those poor people still paying AOL] has become “you”ve been nailed”. If it were not enough to have the quixotic vampires and zombies on FB, the hotmail emails are now stacking up alerts to open up other incoming messages on other platforms, from walls to superwalls to highballs and phone calls and text messaging. I believe that services like Netvibes are going to have redouble their efforts to become the singular interface. Spaces like MSN may need to be more liberal in allowing new applications and widgets (opening to other services) if they want to retain their primacy.

Here’s what I like in these new forms of communication: the enlargening of the net of friends with whom I am in touch and the rapidity and diversity (if meaninglessness) of the functionalities, such as poke back.

Here’s what is getting messy: where is the centralized database, warehousing of the messages and addresses? It’s getting more complex to keep up with all the threads.

Here is what is ugly: the paroxysm of messaging. Basic overload. It is getting too much even for me.

With this proliferation of “e-mail” (broadly speaking electronic communication) platforms it makes me wonder if standalone email will evolve to only be for spam and “non friendly” communication while the other services hone the idea of opted-in messaging with pre-selected contacts (“friends” in FB, linkedin contacts, Groups, etc.).

Meanwhile, the news announced last night on CNN Money (or Fortune) whereby Microsoft won out over Google and invested in $240 million for 1.6% of Facebook implies that FB is being valued at $15 billion. You have to admire Zuckerberg’s resolve at the age of 23 to delay the IPO for yet another year or two. Is he holding out for the 100 billion award? Borrowing from the tipping point concept, I see three tips: the first was the programmer/hacker rush to create their own applications on FB. The second, is the current tsunami type wave which is based on the social

networking/gaming and is spreading like wildfire among groups. Then the last one will be as FB becomes a more accepted messaging service replacing emails (on hotmail, gmail, etc) and becomes accepted unilaterally at work sites. The

deal between Blackberry and Facebook speaks to the early stages of this notion (they’ve already termed it “Faceberry”). Let’s see how Blackberry shares face today. By getting a foot in the door with FB, is Microsoft going to be able to bring what amounts to an open platform feeling (that exists in FB) to its sites? Meanwhile, ‘poor’ old Google will have to make do with spreading its Orkut social networking site which, for now, is only known in Brazil.

For other blogs and articles on the topic (for those of you who didn’t get enough!)
Seattle pi
Guardian Unlimited
Ben Metcalf

I'm Minter Dial and I serve my clients by elevating the energy and connecting people and ideas. I relish being an engaging professional speaker on leadership, transformation and branding with a specialization in digital transformation since 2009. I'm known for being someone who walks the talk and delivers on or above expectations. I'm the author of three award-winning books, including my latest book Heartificial Empathy, Putting Heart into Business and Artificial Intelligence that won the Book Excellence Award 2019 and was shortlisted for the Business Book Awards 2019. My next book on leadership, You Lead, How Being Yourself Makes You A Better Leader, published by Kogan Page, comes out January 2021.