Visit to Hanoi Vietnam- Part 1 of a 3 part recount:

For my first piece on Vietnam, I thought I’d start with a general overview. If nothing else, it’s a number of facts that you may or may not have been aware of. In parts 2 and 3, I will elaborate more on my experience in Hanoi. Happy trails… For more info, check out the CIA World Factbook [link broken].

The Vietnamese economy has grown at an estimated 8% this year. The population has grown 1% over the last two years, but down from +1.5% in 2000, giving Vietnam now 85 million people. This makes Vietnam the 12th most populated country in the world. The recent spate of growth is obviously manifesting itself most intensely in the urban centers which, through poor city development planning, are overrun. And what makes the heavy population so much more impressive is the fact that the livable. flat (i.e. non mountainous) portion of Vietnam is so condensed (around Hanoi and Ho Chi Minh). The Communist one-party non-democratic government has clearly merged to a more red-capitalist form of economy, with the language of State Planning (5-year plans, etc.) still very present in ironic counterpoint to the Vietnamese stock market (inaugurated in July 2000) which continues through its early growth pains.

The 5-year planning committee for urban development, however, has clearly not been vigilant or effective. In Ho-Chi-Minh (HCM), there have been random if not gratuitous conversions of streets into one-way streets, which has caused traffic swells to be diverted onto the ancillary roads. Traffic hour(s) in Hanoi are nothing short of impressive. Somewhat reassuringly, the English language newspaper (“Viet Nam News”) was able to voice some criticism about these developments. I was concerned that the poor level of transparency in the press might not allow for such open discussions. It is clear that criticizing politics remains a very tenuous if not dangerous activity. The corruption is apparently rife throughout the Vietnamese apparatchik.

There are 54 different ethnicities in Vietnam, dominated by the Viet people with 86% of the total. [I would note that I did not see one single black person throughout my visit.] The population remains largely rural (estimated at around 25%, up from 15% in 1960 and 20% in 1995). Sixty percent of the Vietnamese population is under 30 years old. This fact alone creates a unique vibrancy to the country (and to Hanoi in particular). Given the rampant population growth, the government has imposed a limit of up to 2 babies for couples in cities. However, many couples are prepared to pay the fines imposed for having more – especially if it means to have a baby boy. In the countryside, where the agricultural activity is extensive and remains labor-intensive, the families continue to have large families to support the manual labor demands and ensure the future safekeeping of the older generations. The export in rice, in particular, is very strong. And while the trade is booming in many areas, the lack of a solid infrastructure is surely problematic for continued, efficient growth. From raw materials to 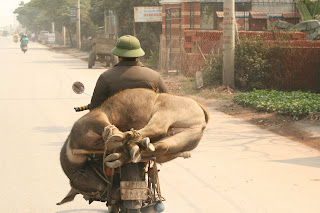 finished goods, the most common form of transportation is two-wheeled, providing ample photo opportunities. During the course of my visit, I witnessed on the back of various motorcycles the following cargo: a dead pig [the size of a buffalo if you ask me — see picture left], a set of 6 cages carrying close to 50 cats (destined for the Chinese tables), a huge glass pane between two riders, six television sets… Endless diversion, if also a sad state of affairs.

The standard of living in Vietnam is clearly on the rise. In recognition of the increase in the GDP (expected to surpass $3,300 per capita next year), Vietnam will move up to a middle income developing country in 2008, two years ahead of schedule, as Vietnam’s President Nguyen Minh Triet just announced (Dec 4, 2007 Vietnam News). Wages are, that said, not entirely set by the free market. The government lays down the “framework” for salaries, based on three types of work: rural, city and Foreign-Investment. The annual wage for the latter category is set at 1 million Vietnamese dong, or about $800USD.

This trip to Vietnam was a true eye opener. A wonderful hospitality and kindness among all the people I met. A true pleasure.