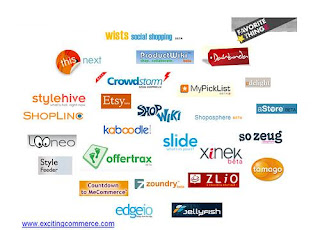 In the wake of the social networking onslaught has come the wave of the more overtly commercial social shopping online concept. A combination of social networking and e-commerce, the concept is a consumer-centric version of Amazon, putting the shopper at the centre and giving the “subscribers” the opportunity to vote, note and share what they like and don’t like. Community oriented shopping that allows the individual potentially to buy smarter is definitely sociologically “in the money.” I have a friend on the west coast (USA) who has launched Stylehive, but, not surprisingly, there are many competitive sites bidding on the same trend in the US (as in the brandogram above) such as Kaboodle Beta and ThisNext (N.B. ThisNext has a nice tagline “real recommendations from real people,” but also has a fairly scattered interface).

And these social shopping sites are popping up in other places around the world, including Osoyou (out of England) and I Like Totally Love it (Beta, out of Germany). While I seem to have trouble getting engaged with these sites, I must say that my favourite functionality goes to Stylehive focusing on “featured people” and its easy to understand “followers” concept, as well as the “popular bookmarks” (my lingo). Kaboodle uses “featured kaboodlers” which just is a little too esoteric. In my opinion, the battle will be won by the one(s) that establishes a true point of view. I would be remiss not to plug shopwiki, a portal attempting to list everything you can buy on line, although I note that it has only limited “social” applications so far.

Social shopping brings a new era of immediate customer feedback and will almost certainly have an impact on the marketing budgets of the future. I can anticipate that certain “opinion leaders” among the consumers may become tomorrow’s true branded spokespeople (as in the speak about your brand for real). Soon enough, we will start talking about word on line as opposed to word of mouth, and how about contaminated goods (contracted virally). I am sure that, at one point (if they haven’t already), Google and Microsoft will get more seriously in on the action of social shopping. The current MSN Shopping site is rather plain and web 1.0 for now.

As far as the future of shopping on line is concerned, there is a whole 3D world out there to augment the experience (a Second Life goes to Third Life…) Presently, the efforts of 3D on line are essentially focused on the viewing of items, without the community aspect. Beyond the ability to zoom in on articles that already exists, the new concept is to replicate the mortar store shopping experience virtually.

A few examples across a variety of consumer goods: Thanks to MED Blog, I found out about Potoroze (en français) which is still in BETA (& private, therefore non viewable). But, there is a Potoroze video screencast [link broken]. And here, at La Redoute (VPC or Distance Selling specialist), you can use a virtual mannequin to try out your clothes. And, for the shoe fetishists, there are notions of a ShoeTube…shoes in motion! Finally, (thanks to this site) at mydeco.com one last link to a 3D tool for planning the decoration of your room (UK site).

Meanwhile, Walmart is apparently developing an altogether new experience for its online shopping site, whereby you can walk down (empty aisles) and actually remove items from perfectly stocked shelves, do a 360 inspection of the article, put it in your virtual (but visible) caddy and continue to walk down the aisle… And the good news is that you can mute the “attention Walmart shoppers” announcements, get more information on the products than you can normally in a store, much less deal with being seen by the hoards of other Walmart shoppers. When I find the prototype, I’ll be sure to post it.

In the meantime, attention all you community shoppers, let your fingers do the talking and buying, but don’t forget that your credit card must have limits and to live within your limits!