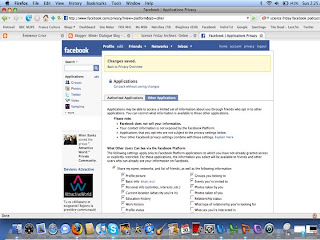 Facebook now claims to have 69 million active users with 250,000 new registrations per day.

Emily Vander Veer started by stating that it is not possible to use Facebook and still be private, despite switches and toggles that allow a user to customize his/her own privacy settings. Only 1 out of 4 Facebook users is aware of these administrative privacy measures and most people don’t alter the filter settings. Moreover, as Alessandro Acquisti said on the show, when there are too many choices, there are sub-optimum results [useful to consider in retail environments as well in terms of giving a consumer too many choices].

The moral of the story is that if you don’t want something to be public, don’t put it up on line. I believe that Facebook will help educate people to the nature of having a public profile on line. The new generation (Y) will clearly help craft new habits and attitudes, despite the baby boomers’ cautioning.

The Pew Research Center has determined that people have subtle expectations about the level of privacy of the information available on line. Obviously, just in America alone, there is much work to be done to manage what is a dynamic sense of what is private. The adaptation to international cultures will require even more work.

In order to ensure its longevity, Facebook must understand that it has a responsibility to facilitate the privacy settings and, more importantly, its user base’s understanding of online privacy. For example, Facebook ought to allow people to understand how other people [users] are using their identity. After receiving a notification of someone else tagging a photo of you, you ought to have the choice to accept or block it. If Facebook does not take such proactive steps, there is the ominous risk that the government may feel inclined to intervene.

As they say on the NPR show, Facebook is not free. It is paid for with your personal information (aka your face). Since there is no vetting process, you are likely to have “pay the price.” But like most things in life, one must learn to adapt. I have long subscribed to the notion that your online presence will be your CV. So, it must be managed accordingly. But on balance, it is better to have a presence than not to have one.

Recently, Facebook has made a privacy “upgrade” whereby you can now classify people as either friendly friends or work friends, etc. Of course, this is a tricky operation post-factum to reclassify who goes where – without pissing them off, that is. It will be interesting to see how that plays out.