Crisis, What Crisis? Bring forth the Internet

As we spin into the depths of this worldwide economic crisis, the opportunity for companies to move to more

efficient, effective and measurable marketing activities online seems perfectly obvious, if not natural. The time has never been more appropriate for companies to ramp up online activity because their consumer will be increasingly on the other end waiting for them. I identify below five main reasons why the consumer will be more than ever present on the Internet specifically because of the economic downturn.

(1) In this period of crisis, there is a very real likelihood that people will spend even more time online in the near-term because the web will offer a cheaper alternative way to spend time (watch YouTube or Daily Motion videos) and find entertainment (on a myriad game sites) than, say, going out to dinner in a restaurant or going to the flicks. Rather than going outside to buy a newspaper, free subscriptions will bring people online (or the news will be downloaded to their mobile phone). Doing banking/finances on line (a cost benefit for the embattled banks to save on bank tellers), paying your paperless bills (save on postal costs) and other administrative tasks will bring people to their computer.

(2) The internet is the most expedient way to do networking — especially important for those people without a job (linkedin, monster, etc.). The Millennials will need to have the “older” generations on board to hire them, but in general, the custom of business networking on line is beginning to build already. This notion reinforces a tenet I have long held which is that your presence online will become your most effective CV or resumé (see here for a prior post).

(3) There are plenty of new applications and sites that now make searching for a bargain substantially easier, specifically the price comparison machines, such as Kelkoo, PriceGrabber, Shopzilla… And this point goes beyond the notion that you can get better information from internet sites (and peer-to-peer reviews, etc.)

(4) In times when travel may be too expensive, there are now many virtual ways just to stay in touch with your friends and family (skype for face to face, facebook for group hugs or twitter, jaiku for group pecks). Essentially, the internet social media networks are intrinsically designed for harder economic times. Not all of them will survive, of course, but each will be forced to carve out its niche, its purpose and the likelihood is that the economic crisis will bring much needed acuity to each social media network’s positioning.

(5) And, finally, the truth is that items sold on line will be cheaper in fact and in perception. When you add the cost of getting in your car (time is money…), consuming fuel with the risk of traffic infractions to go to the brick & mortar (only to find a less informed salesperson) the chances are that the consumer is in effect going to find the Internet a cheaper way to consume. With people and companies forced to work harder and longer hours to survive, time for personal shopping will decline ipso facto. Retirees who have already shown a propensity to hit the ‘net, will do so even more (note to self: big business in keyboards will large keys). Driving to the store hardly eases with age. And, lest we forget that, with driving, there is the added nuisance of polluting the environment. Clearly, on the supply side, more and more companies will move to e-commerce platforms (expensive as they may be initially) because they offer a higher margin business model once the critical mass is reached. Moreover, having one’s own e-commerce site is a useful counter force for the brand/company against a distribution network whose strength in the balance of power has become hard to manage. 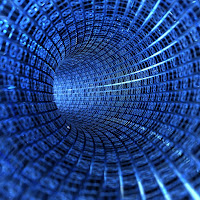 With the backdrop of the demographic and sociological surge of online traffic, plus the terrific growth numbers in developing countries, it all makes me believe that we are truly in the vortex of the paradigm shift. Beyond the crisis, we will come out different, truly changed in our behaviour and, specifically, our relationship with the Internet. With the oft mentioned Chinese expression (pictogram above), in times of crisis, yes there is danger and great opportunities. The danger lies in the fact that the crisis may be worse than expected and certainly the Internet will not solve everything. And the Internet has its own dangers in terms of potentially dehumanizing relationships or rendering us captive to the 17″ screen…  That said, nonetheless, it is worth noting that since the Internet and the e-companies have already experienced their own bubble-bursting and crisis, they have created more durable models, filled with more substantial content and purpose.  In the process, Internet companies are (perhaps inherently less fat and) potentially more resistant to the current crisis than many brick & mortar brethren.

All the same, the economic crisis presents a golden opportunity for the Internet. How to play it? That will be the subject of another post.