Our visit to Dubai for family holidays

Rarely does one get a chance to see a city in the making, especially if you have lived all your life in “old” Europe and/or the East Coast of America. For those in the Shanghai’s of the world, it is perhaps current currency. Dubai was my first such experience, where there are an enormous number of cranes constructing the city in front of your eyes. According to a number of sites, 20% of the world’s active cranes are in Dubai City. You wonder if or how all the empty spaces will be rented out at the promised exorbitant rates. But, you do get the feeling that Dubai is the new promised land… 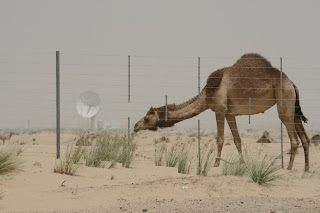 Fashioned with verve, ambition and purpose, Dubai is a fascinating place to visit. For such a lightly populated city, it has many surprises, especially in terms of its diverse architecture. Dubai is a hybrid of many cities. At times, you see can the Las Vegas inspiration (all along the road to Bab Al Shams you can see large detoured billboards representing the type of resort to be constructed by the Al Bawadi Group over the next 8 years). The project involves the building of 12 enormous themed tourist attractions (as in “Andalusia” photo to the right below, or Asia Asia, Europa, Musica, Americas, etc…) that speak to Dubai’s international appeal. Then there is the NYC feeling of the monster skyscrapers–albeit with a greater density of interesting architecture–along Sheikh Zayed Road. Down at the Dubai Marina, you might as well be in 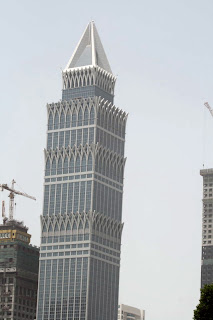 Miami. That said, Dubai also has its own markings, including the Arabic finishing touches on many of the skyscrapers, and wonderfully decadent hotels lining the beach (numerous 7* locations, if not necessarily 7* in service, certainly in price). To make sure you aren’t in the West, you also have the painted camels (ex cows) dotted around the city and beach (see down below for one fine example).

The Dubai airport is an experience unto itself. The diversity of people lining up at immigration takes a page out of the United Nations yearbook. It would even have been proportionate representation except for the relative under-representation of the Chinese. The airport, which is open 24/7, is just bustling with activity. Its duty free stores are the most active in the world–the liquor stopover is elemental for all Dubai residents as it is impossible to buy liquor in town.

Our first port of call, after profiting from the “inside the airport” 88-room NH Hotel, was the delightful Bab Al Shams desert resort (part of the Jumeirah Group). Along the way, you go through the Desert Gates (pictured below). 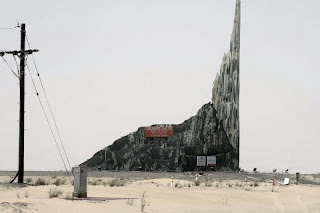 The authentic outside-in-the-desert dinner at the Al Hadheerah, replete with horse show, camel riding (photo on right) and a variety of dancers, was a lovely first ‘night out.’ You can also have your personalised henna painting or partake in a traditional Shisha. Altogether, we spent two fairly slothful days at Bab Al Shams, including a one-hour camel ride — a warning to those who don’t know: a camel’s girth is huge and for your legs, therefore, riding a camel can

be a tortuous experience. As I mentioned above, on the way to and from Bab Al Shams, you see at once the desert of the past and the Dubai of the future. With all the themed resorts along the road (due to be built between now and 2014 — see here for virtual vision of the future projects), Bab Al Shams desert resort will likely become some day Bab Al Shams downtown resort.

Moving to the city, we next stayed at the Jumeirah Beach Hotel, where we had a lovely experience, benefitting from the splendid family activities available (especially the Wild Wadi 12-acre water park). The beach facilities and amenities, the multiple pools and ever-available buggy services were just perfect. We also enjoyed a very lively dinner at our friends Peter and Isabelle who live in Jumeirah 1 [thanks!]. 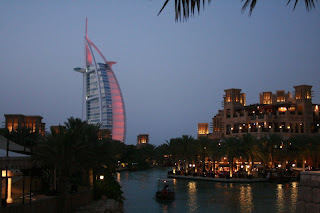 At Madinat Jumeirah, down the coast, is an Arabian-style sprawling complex with 3 different hotel environments (Mina A’Salam, Al Qasr and Dar Al Maysaf). There are nearly 600 rooms & suites, 29 summer houses and 7 royal villas (each with a private pool). And with each of the estimated 30 pools in the complex, there is a lifeguard (by law) through to 10pm. With guards sitting even at the private swimming pools, there is not much room for skinny dipping and it certainly is an intrusion on romance. We enjoyed a lovely abra ride around the Madinat creek, a visit to the “souk” (aka another big name mall) and dinner at an Arabic/Lebanese restaurant (one of 45 restaurants located in the Madinat complex). Aside from the muezzin and ever present veiled women, you get a sense of the formalism in Dubai after reading the newspapers. When reporting on the country’s ruler, you can read on any one page of the Gulf News up to ten times the full moniker of “Vice-President and Prime Minister of UAE and Ruler of Dubai, his Highness Sheikh Mohammed Bin Rashid Al Maktoum” (which, once you have written it once, you can apparently reduce to Sheikh Mohammed for short). Of course, you will also see multiple references to Abu Dhabi President His Highness Sheikh Khalifa Bin Zayed Al Nahyan, not to be confused with General Sheikh Mohammed Bin Zayed Al Nahyan, Crown Prince of Abu Dhabi and Deputy Supreme Commander of the UAE Armed Forces. Sure makes one appreciate terms like Sarko and GW. 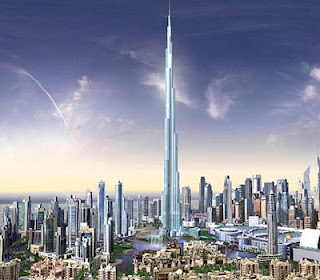 Among the curious sights, you will see buses after 5pm in rush hour, packed with exhausted Indian construction workers, their heads bowed in sleep, leaning on the headrest of the seat in front. Earning a paltry 700Dhs per month for non-stop 12-hour gruelling days, they are at the low end of the totem pole (and are frequently treated as such by the locals). There are apparently 20,000 workers at the Dubai Burj Tower alone, working day and night. We were driven onto the construction site of the world’s highest building by our driver — unheard of access in western countries. But it is an impressive sight to see cranes functioning some 629 metres (today’s current height) up above you. The building’s completion date varied according to the person with whom you were speaking. And its final height has been kept under veil as well (some figures point to surpassing 800 metres– wikipedia says 818 m).

I have two astonishing mental images to share with you (not photographable). First, was one of a fully veiled woman driving an SUV with dark windows. The second was when a young (25-years-old) Emirati drove up beside me (seated in the taxi passenger seat) at around 60kmh and, burnishing a big smile, faked turning his SUV into the right flank of the taxi. Very pointed.

Speaking of DTA taxis, which were nationalized in 1997, there are 12,000 of them in Dubai — apparently not enough for the peak hours and, because of the heavy traffic, invisible in downtown Deira (the other side of the Creek – night time photo to the left)… But, virtually all the taxi drivers were polite and service oriented.

As for taxi economics — a topic which continues to interest me (a hangover from «Freakonomics»?) –I found one willing driver, Mohammed, who revealed all. If a car (whether the driver is solo or partnered) earns Dhs12,000 in a 30-day month (i.e. the car must rack up Dhs400 every single day 7/7), the driver earns a 35% commission. With the metre feeding directly into HQ, every move of the taxi is recorded. All the petrol and insurance, etc., is taken care of. Therefore, a solo taxi driver can, if he makes the quota, earn Dhs4,200/month or about $650USD.

There is a very clear cultural division (of labour) when it comes to the jobs. Here is what we discovered:
* The non-officer Police are from Yemen.
* The Taxi drivers are Pakistani (also heavy trucks) or Indian [all of the ones we had were from Kerala]; any female taxi drivers are Filipina.
* Personnel in the hotels are mostly Filipino and Sri Lankan.
* The technical jobs are also won by the Filipinos.
* You will find Bangladeshi as waiters.
* And, as for the Emirati–those that have to work–you will find them at the airport and as officers in the police force and army. 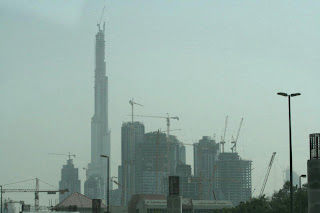 Dubai is a modern marvel (perhaps a lovemark unto itself!). In the image of the monumental Burj Dubai Tower, its future is inspiring, but not ensured. It sometimes feels like a house of cards — but, it has every chance of success based on the sense of service and its prime location in the world. I would be an even bigger fan if there was not always a latent feeling of oppression. Then again, you can get the same feeling, in different parts of town, in pretty much any city. It is a worthy visit — just don’t forget to budget for it.