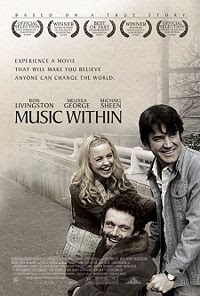 Directed by Steven Sawalich (second feature film after Sunday in the Park with George and Phil in 2000), Music Within is a film much less to do with music (as much as all the wonderful 1960s hits strike the nostalgic chord), but everything to do with the power within. With Ron Livingston (roles in Office Space, Band of Brothers) playing the lead protagonist, Richard Pimentel, he learns that having a natural talent [public speaking] is not enough to succeed in life. Pimentel takes the challenges and manages to add much pepper to his life via his perspective-altering experience in Vietnam.

While Pimentel, the man with a new meaning, manages to seduce the gorgeous and free loving Christine (Melissa George), the greater relationship developed in the film is with his pal, Art Honeymoon (Michael Sheen who played Tony Blair in The Deal), a man with Cerebral Palsy. Art is indeed a piece of art.

Full of purpose and based on a true story (Pimentel was instrumental in creating the Americans with Disability Act ADA, passed in 1990), the film lays open the dysfunction of families and couples. It also demonstrates the beauty of imperfection. And the film tackles the very real question: “What do you want [with your life]?” Pimentel rises to the challenge: “Get a Life!” (by Dr. Padrow [Hector Elizondo] at Harvard University. Here is a letter by Richard Pimentel regarding the film (via Milt Wright & Assoc.).

One of the more important pieces of [business] advice comes out of a Pimentel radio interview in the film: “Don’t lead with anger.” The lesson: do lead with passion [but don’t let the bad emotions in].

And, in one likely non-accidental reference, I was smiled at the statement: “If Bush wins, … Oh the cost of it.” Of course, they were referring to George Senior in a different context. But, the ADA was passed under George Bush Sr.

I think Roger Ebert’s review of the film is a worthwhile read as it contains many personal comments. Ebert rightfully points out (as Pimentel himself admits), the ADA was the work of many people, including Marca Bristo.

Personally, although the film has apparently only won a couple of small awards (see the top line), I give the film a great thumbs up. Great acting, great music and plenty of thought provoking moments.