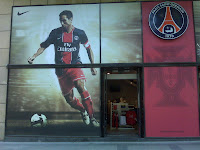 I had a marvelous marketing moment recently. I was walking down the Champs Elysées and, having just flown and enormously enjoyed Emirates Airline, I saw a photograph [left] on this storefront of a Paris St-Germain (PSG) football player wearing his uniform emblazoned “Fly Emirates.”

Here is the thought: the Emirates’ advertisement actually made me feel good about PSG, a team I don’t follow at all! I wonder to what extent the marketing folk at Emirates are aware of such a reverse feelgood factor? Is there any way to capture that beneficial sentiment emitted from a sponsoring brand? It could appear a cruel twist of fate that Emirates must pay so much money for this real estate. The complementary imagery between any two associated brands is vital.

I add that Arsenal FC currently has the same Emirates-style contract; however, in this case, it does not move me in the same way (as I am a Liverpool die hard fan). Meanwhile, the marketing team at Emirates clearly has targetted many top notch teams around the world. As their Chairman, Sheikh Ahmed bin Saeed Al Maktoum, said: “Emirates believes that sponsorship is one of the best ways to integrate with our passengers. It allows us to share and support their interests and to build a personal relationship with them.” They participate in a whole host of sports (golf, tennis, rugby union & league, football, horse racing, sailing, etc.) and have a long trail of sponsored teams and associations, including the English RFU Rugby Sevens, Team New Zealand America’s Cup, FIFA, and many more.

Aside from pondering the efficacy of sports team sponsorship, I would love to know if anyone else has had other similar moments where the sponsor company (lovemark?) actually creates the affection?

Knowing that any single person can be a brand him or herself and may want to buy or sell (i.e. blogs) advertising space, I have come up with a few magical, fantasy associative advertising opportunities:

Any other joint ad-ventures you can come up with?