Airline Ads — the good, the bad and the luxury 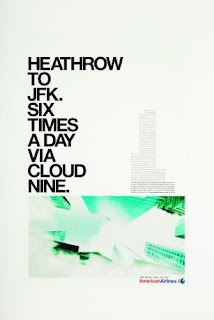 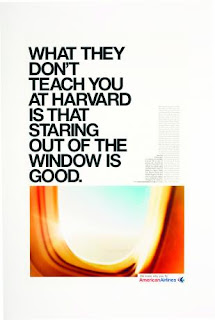 In these trying economic times, one of the industries that will inevitably be hit hard (again), will be the airline industry. Whether for personal or business travel, there is likely to be a good amount of seat-belt tightening. Some wise folk would say that NOW is a good time for the companies [that can afford it], to invest in attracting new business. In this vein, I took a look at some of the print advertising messages by airline companies around the world. While I certainly can’t say that I did a definitive and comprehensive search of all the ad creatives, I did find that there were certain patterns. When I take the NORTH AMERICAN companies, for example, it seems to me that the companies are communicating less about the experience in the plane and more about the “dream” of travel and the number of destinations serviced. In the creatives here (which I believe may be a bit dated) American Airlines (left) puts forward that it flies six times a day from NYC to London “via cloud nine.” A second American Airlines ad (right) presents the benefits of staring out the window. Implicitly, they are asking you not to look at the quality of service inside the plane, no?

More current, American’s billboard ad above is another curious statement. What are they selling? They are proposing planes that know how to land in water? Not going to rock my boat, if you see what I mean. The creative concept here is to show that you can have wifi internet access in flight. Dubious item to search if you are trying to encourage people to fly. To the right, you see Delta pushing its inflight entertainment (curiously promoting playing its Texas Hold’em game against fellow passengers). I would be remiss not to include Southwest, a true lovemark, which is proud of its advertising (historical creatives posted on its own site). But, even Southwest, in this output (left), is discussing the technology equipment (and while we haven’t heard the last about inflight telephone conversations), we are again not truly onboard. 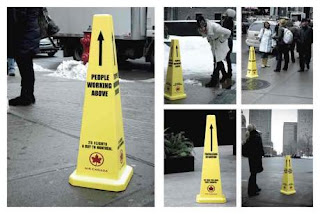 And then Air Canada (left), is encouraging pedestrians to consider flying with its “People Working Above” humour. Again, not much content in the way of in-cabin service. Had they picked snow-packed scenery (there is a BIT) and miserably cold people, then the concept might have been to incite people to fly away to warmer climates? Bottom line, the North American companies seemed to be more prone to communicate about the concept of flying, rather than the experience itself.

And as a sign off on the North American situation, the next step is to focus on on-board advertising to its passengers…as a way to gain extra revenue (see here in a USA Today article earlier this month).

After the North American ads, I took a look at the European companies. Mainland companies were not as “out of the cabin” as the American companies. Air France’s creative (left) has been running for quite a while. It’s a nice image, but it leaves me wondering about the reality in the cabin. And their competition up north, Brussels Airlines (formerly Sabena), had decidedly the same creative air (below). Something about water as being part of the flying experience? The need to sit on a wooden board? I, for one, am absolutely horrible at sitting on the ground. Interestingly, both ad creatives use women. 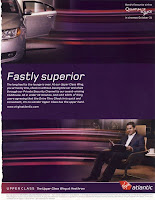 service concepts. On the left, you have an ad (9 inches) targetted presumably toward the female customer yet again. On the right, Virgin is going at the pre-flight experience with the offer of the limousine and a fast track check-in into the Virgin lounge. “Fastly Superior” and a cut above in terms of service proposition. Whether it is 9 inches of pleasure or the limo-to-lounge service, there is little humanity in this offer.

Moving to Virgin’s competition, British Airlines is communicating in this creative on the onboard experience. Again, the focus is on the “mechanical” or physical benefits on board. With a cute creative (using the windows as eyes), the ad speaks to the ability to get a real night’s sleep in the plane (all good when you are flying overnight or on very long haul flights). Of course, in this creative by BA, you have to understand that you did not fly BA in your last flight. I have snuck in an Aeroflot creative just to say that they are more in the North American category…not much to sell onboard, unless you like the idea of doing wheelies and 360s. European companies are in for tough times, just as much as in the US, with lots of short flights, expensive personnel and intense competition (and regulation). Recently, European legislators have decided to go after the European companies for improper pricing advertising. Read here for the June 2008 article from the BBC.

Finally, moving to Asia. There are many examples that reinforce the notion that the battle is actually for in-cabin comfort and service. Here, we see much more of the human element. For example, Cathay Pacific (below) is not afraid to personalize the experience.

An Air India execution (below), in broad daylight, with the same romantic couple concept.

And the king of inflight, luxurious and personalized service, Singapore Airlines, in a veritable world of its own… Here’s the suite landing execution:

So, in summary, the Good (European) tend to be in the imaginary. The Bad (North American) largely ignore the onboard travails. And the Luxury (Asian) are vying for top dibs in terms of the personal and personalized onboard experience. In these difficult economic times, you have to wonder which airline companies are going to survive. Aside from ensuring that the fleet is up-to-date and safe, are companies going to be cutting back on the little luxuries or, to the contrary, investing in the details?

[And then, if you are interested, there are the airline company slogans. I found this site (textart) from Russia, that regroups all the slogans for a host of industries. Here, Airline Industry Slogans it is just for the airline industry. A useful resource for us marketeers (although I can’t vouch for how up to date it is)]