Airline competition and inflight entertainment are you on board?

As the competition for airline passenger dollars is only going to get worse — between higher oil costs, personnel issues & union negotiations, terrorism threats, ecological considerations [not to mention economic crisis] — you wonder how most of the companies in the airline industry are going to get through this. In many regards, the question is whether the airline companies have kept a keen eye on customer satisfaction? For myself, there are five key criteria (in order):

The first two criteria have the benefit of being quantitative. The last three are subjective and certainly vary within a company’s fleet, much less between the competitors. So, on what basis should airlines be competing?

Although the US market remains the most active in terms of volume, the margins are clearly under tremendous pressure and there seems to be little value creation by the US companies. The hub system, security hassles and unpredictable weather make travelling in the US already quite the burden. But, on top of that, the US airline companies seem to be in a negative spiral of cutting costs, eliminating frills and, as a consequence, taking the fun out of flying — particularly for domestic flights. It would seem that the US airlines are bent on competing on cutting of costs, which unfortunately means too many grumpy personnel and unhappy passengers.

Looking at Europe, you only have to think of the exits of SwissAir (now Swiss Intl Airlines) and Sabena (now Brussels Airlines and 45% owned by Lufthansa), the continuing tribulations at Alitalia and the massively splintered market (with each country having its own network of companies) to know that there is going to have to be a further shakeout. Moreover, the frills and pleasures of flying on European carriers isn’t particularly thrilling either. And, if the high speed train network becomes more commonplace, there will be evermore competition on the ground. But, for now, I am going to compare the experiences inflight.

To illustrate the difference in offer for two international flights with a similar duration (6 hours), I have made a few comparative snapshots of life in the cabin (economy class that is) for two different routes, with a focus on the inflight entertainment.

First [above], there is Air France (for which I am generally a big fan). On this route from Paris to Boston (26 Jun 2008), they offered a dingy inflight entertainment — with no personal screen (left – you get to see where it might be) on the flight (7 hours in broad day light). What you get is the ‘ole pathetically small and distant general screen (to the right). The good news? You are encouraged to read or rest…On the flight back from New York to Paris, the plane was equipped with a [very small} personal screen, but on the West-to-East flight, you are only interested in sleep.

Now taking look at another international flight of a similar distance, Paris to Dubai with Emirates Airline; the story is radically different. The personal screen (pictured to the right) comes with masses of choice. The touch screen is very user friendly (I blogged about this before — see here). And, even the booklet announcing the inflight entertainment is interesting to read. It comes with an informative music anthology (scanned below)… 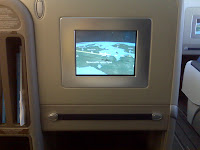 What is even more startling is when you start to compare Emirates Economy Class and Air France Business Class. On the left, you see the Air France business class experience, Paris to New York. The screen is stationed on the back of the seat in front of you which, good news/bad news, is quite a distance. And, on the right above, you see the Emirates’ economy class entertainment system. The screen is touchscreen (better functionality), bigger and, as you can see with the seat number (28A), is entirely personalized. You might say it’s a small detail. First, details count. Secondly, I feel it is a huge difference because it is what I want in a long flight. Kudos for knowing your customer.

The truth is, however, the level of comfort, service and amenities absolutely depends on the route you are on. Some routes — for the very same airline — are better equipped than others. The problem with such “variation” is that, as a passenger, you no longer can trust the brand you are choosing. And, in terms of comparing one airline with another, unless you have the option of taking different airlines on the same route, you and I are systematically evaluating apples and oranges. So, there remains plenty of confusion out there and, to the extent that timing and cost remain top considerations, the “fluffy stuff” all too often takes a backseat.

All this to say, all things are not created equal in the airline industry. And, with the stiffening of competition, the economic crisis and inflexible cost structures, you have to imagine that the market forces will not be kindly for the airline companies that have taken the fun out of flying for both cabin staff and passengers. In another post to come, I am going to look at the advertising campaigns as a looking glass into the strategies employed by winning and losing airlines. Watch this space. In the meantime, please give me your feedback!