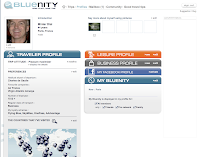 The battle of the travel space has moved to the social media space, at least in Europe. In November 2008, Air France/KLM launched its Bluenity social media site, joining the Thalyseo site for train travellers on continental Europe (between Marseille and Amsterdam).  Travellers on Air France/KLM can find out good addresses for their destination, connect with other flyers in their network, share cabs…  Its tagline is: Same place, same time.

In the same basic timeframe as Air France, British Airways beta launched  (Oct 2008) its Metrotwin site, Two Cities, One Place, an online community for people who fly BA’s most popular route between New York and London.  Whereas Bluenity is global in scope, Metrotwin is focused merely on London and New York.  It features recommendations of the best places to go in both cities; users can suggest a twin of each restaurant, attraction or neighbourhood in the other city.  The site also features the Metrotwin blog with a line-up of ten bloggers.

In a follow on act, BA launched another social site last month (February 17th) to promote the BA Great Britons programme, which offers 180 free flights each year to any person who wants to fly somewhere to develop their passion or talent. The public has the final say with an online vote.  The log-in authorisation to the site is through Facebook Connect in order to make registration easy.  If you want to apply, however, you had better hurry up as the application deadline ends in 6 days.

In any event, the Bluenity and Metrotwins sites have merits in their easy look & feel, but Metrotwin, with its design and home page, is substantially more inviting.  Unfortunately, with the cutbacks in travel, I don’t know just how successful these sites will be.  In any event, it is coincidental to see BA and AF launch their social media platforms: same idea, same time.  What do you think of these initiatives?  Quid the American airline companies?