Friends, Romans and World Citizens, Lend me Your Ears….

Some INSEAD classmates, at VoiceCorp*, have launched a new service (just a month old) called ReadSpeaker: a way to listen to online content read out loud. I have added the new function to this blog (see the little logo at the top of this post, and which is affixed under each post title). The sign up was incredibly fast and easy (a question of 60 seconds, excluding the 5 minute demo video). You can choose from three languages including English, Swedish and French (American and British are two different languages!). You can also select between a female and male voice. Several more languages are under work. I have selected, for now at least, a female British English voice. I have asked them if there is a way to have different languages in the same blog, according to the language of the post, since I write some posts (about 1/10) in French. Am still waiting for their answer, so for now, the function is only good for English-written posts. 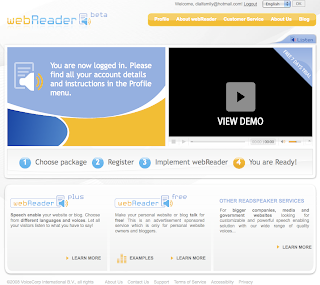 If you want to know a little more about webreader, you are going to need to polish up your Portuguese (Brazilian). See here. [UPDATE 10/3/09. This bug has been fixed.] The other oddity is that the site is called WebReader (screen shot above) as opposed to ReadSpeaker. Clearly, some a few little startup wrinkles to iron out.

I have not compared with either of WebReader’s competition, Odiogo and Talkr; but, I would very much like to have your feedback on this application. Can you make out the meaning? Is my syntax good enough, you ask!? Like her voice? Do you like having the option?

*VoiceCorp is the leading Software as a Service (SaaS) company in the area of speech-enabling online content for web sites and RSS feeds.