Gun sales in the US have gone [blasted a hole] through the roof since the end of last year. 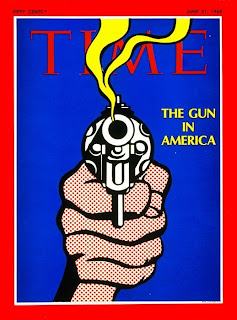 Numerous theories abound for this gigantic leap, centering on Obama’s anti-gun past and a fear of a clampdown. Obama suggested a 500% tax hike on gun sales in 2000. With the continuing headlines of daylight massacres (57 people killed YTD in the US), you wonder how the gun lobbyists and fervent 2nd Amendment defenders resist. Yet, they maintain a lethal stranglehold on Washington, pushing back enough to have dropped the latest proposed ban on assault weapons.

Meanwhile, underneath the increase in gun purchases — hardly your regular anti-crisis remedy or an expected recession-resistant category — some speculate on a fear of increased violence and social instability generated by the crisis. Is it possible that the violence of gangs — that so desperately turn the impoverished (or immigrant’s) dream into a nightmare — will bleed into normal society? Is the US social fabric that weak? While racism and social tension admittedly abounds in many cities, one has to hope that very presence of Obama and his campaigns will bring the US through to the other side; at the very least, so that there is no massive breakdown in social order. I have to believe that we are observing, in this hike in gun sales, more exaggerated and outrageous fear-mongering.

What can be done to reverse this trend or, more importantly, undo the US proclivity to buy and use guns? On this the tenth anniversary of Columbine (April 20 1999), maybe it could be via the viral internet that a mass anti-gun movement could be started to aide the White House and the DC crowd to see straight. I remain deeply saddened by the American violence that is so hardly reconcilable with the world’s leading democracy.

Any such action should also be accompanied, in my opinion, by an element of greater controls on the video gaming worlds (PG, G, R, X-ratings?) that have clearly contributed to the wild dreams of the gun frenzied youth. At the same time, parental leadership and guidance must also play a major role in instructing their children, providing them love and solid (non-aggressive) values. The blame for the gun craze and the rampages is spread around: parents, schools and society at large. We must all take responsibility. Spread the word to un-gun the American Dream!