Starbucks France celebrated last week (July 1st) the opening of its 50th store in the country, with all the Starbucks high brass in attendance.  Located in the Disney Village at Disneyland outside of Paris, this store is the first “eco-responsible” Starbucks outside of Seattle, where they have already opened two such eco-concept stores.

The concept and design of this Eco-Responsible Starbucks is “an evolution of the Third Place concept,” whereby, according to the company, Starbucks would be the third “go to” place behind the home and the workplace. 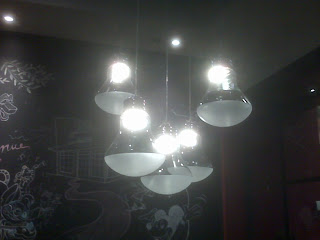 Light within a light decorations

In keeping with a Sustainable Development approach, the design of the store was conceived by using as many local partners as possible (furnishings were all provided by businesses within a radius of 30 km of the store) and to be strongly ingrained with the local [“Disney”] community.

One of the highlight points was that this Starbucks store is LEED certified.  Now recognized in some 90 countries, LEED has become an international standard for benchmarking energy consumption and CO2 emissions.  Three pillars to the eco-conception: natural ventilation for the air conditioning system (-30% reduction in energy), LED and fluo-compact lighting (-90% in electricity consumption in the public zones of the store), and various water reducing mechanisms (mousse, sensor systems…) which are expected to reduce water consumption by 49%. 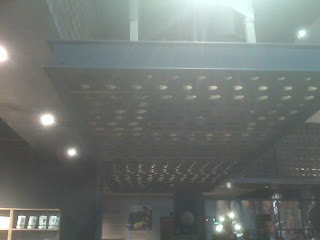 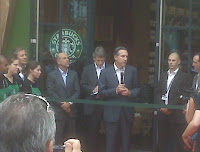 I spoke with CEO and founder, Howard Schultz who was on hand to cut the ceremonial ribbon, and asked about when Starbucks would make it to coffee-paradise Italy?  He said that there were no definitive plans, but that Italy’s day would come some day.  Meanwhile, in another coffee-loving country, Turkey, Schultz was quick to say how well Starbucks has done there. 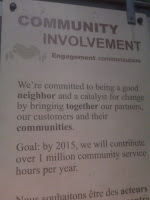 Around the store were plaques that made for casual reading and reaffirm Starbucks’ official policy regarding its community involvement (pictured left) and environmental stewardship.  In all, the Starbucks store continues to provide a different way to enjoy coffee and clearly the Starbucks employees (“partners”) were enjoying the new concept.  Starbucks plan to generalize this concept throughout its network for all new stores and any renovations.  Read here for more on their own news wire.

Irony of the opening ceremony was how hard it was to get served a coffee.  A little “pull” and I was served.  After the store opening ceremony, Starbucks “partners” in France were invited to a 5-year anniversary party in a big tent behind the 50th store.  I took a sneak preview and enjoyed a few words with a woman there to teach about Starbucks’ philosophy regarding bean selection and coffee-making.  Kudos to Starbucks France Managing Director and fellow INSEAD grad Philippe Sanchez.