As mainstream media (MSM) companies continue to scramble to find a winning model, I am inspired to write a post based on the interactive (read: moderation) strategy that the BBC has put in place on its news forums. Having taken a look around at a number of other significant news media sites around the world (NPR, ABC, CBC, MSNBC, WSJ, NY Times, The Guardian, Le Monde, TF1, France 2, The Australian…), the BBC would seem to closest to having a ‘good online model.’

The BBC will take an article and, for a limited time, convert the selected article into an online debate where readers have to register to participate (write and/or recommend). In essence, I assume they make the divide along the lines of articles strictly reporting versus opinion pieces. For the sake of this post, I am going to refer to a debate which is already ‘closed’ entitled: “Is US right to block Google digital library?” (Link no longer working). This is basically how the BBC’s Online Debate works. During the period of debate, the BBC allows registered readers to comment, and very explicitly identifies its full moderation policy. In the policy box (see below), they identify the number of comments sent in, the number published and the number rejected. There is also the number of comments in the moderation queue. 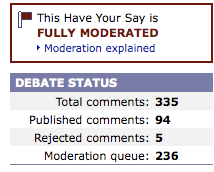 When the debate is closed, they issue the final status. For this particular debate, as marked below, there were a total of 892 comments submitted, of which 539 were published and 35 were rejected. There were some 353 comments (a little more than 1/3) that did not get published. At 539, as we can all recognize, that’s just too many comments to want to sift through. Most of them are terribly repetitive and completely without interest. 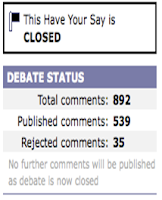 The final element of note from the BBC’s Debate section is the “Recommended” option where registered readers can, at the tick of a RECOMMEND box, give their positive vote. [See the BBC rules here.]

Beyond the article of news you are reading, oftentimes, you can find equally pulsating thoughts and analysis in the internet community’s commentary. Too often, however, when reading most MSM sites, popular blogs and the like, there are just too many comments to wade through, amounting to a completely unreadable mass of jumbled thoughts, written in differing styles, without an attractive layout, in no particular order, and with very little interaction amongst them (for this, I tend to like the “reply to this comment” option). However, in the BBC’s case, the 539 published comments have a democratically voted triage that takes place via the number of positive recommendations. This makes great sense.

For this particular debate, there were 12 pages of comments which received at least one vote (presumably many of which were self voted). The top “recommendation” received 118 votes, the second one 59 votes and so on.

Overall, I believe that the BBC is pioneering a new best practice… However, as you might imagine, I have a few thoughts regarding BBC’s initiative that might improve further their efforts, and could serve as a best practice recommendation for other MSM companies, perhaps as part of a greater solution for the freemium debate.

My Recommendations to media companies: My point of view below is entirely based on being a reader of the article/debate as opposed to the POV of the MSM executive.

1./ More edge to the voting. As a reader, I am much more interested in the comments which have more rhyme and reason. The reader recommendations are certainly worthy, but are not very discriminatory. On a first level, I might prefer a 5-star rating system to add a little more ‘value’ to the reader’s feedback, or an ability to agree/disagree as, for example, the CBC do (which is sorted first to last, and most agreed).

I think that there is room to add a few more dimensions to this democratic (if moderated) style of vote, taking the TED.com system that includes a host of different adjectives that describe the post. Examples of voter categories could be: Well Written, Thought Provoking, Not My POV, Funny, Informative…

2./ Optimal social bookmarking. Another easy add-on would be the social media bookmarking and tagging services. I do not understand why the BBC has not systematically added a more comprehensive list of available services (e.g. what about Twitter?). Social bookmarking can only help spread the word. And, when they do put the tags, the tags come below the comment box… Readers are more likely to tag and bookmark than add a comment I believe, so ‘go with the flow’ and put the tagging zone front and centre. Here’s a good example from mashable (who make the difference between a comment, i.e. thoughtful article, and a reaction, i.e. a 140-character twit).

3./ Most Popular Follow-ons. Another functionality I would highly recommend to the BBC (and other media companies, of course) is the NY Times’ Most Popular Page. This page gives the top 10 of the most emailed, most blogged, most searched and most popular movies. The one that caught my attention most was the ‘most blogged’ list which is a very engaging way to follow the discussion. Of course, I was just missing the ‘most commented’ list.

4./ Stronger Editorial Direction on Commentary. But, more importantly, to the extent that the BBC is spending so much time and resources on the moderation (only culling 1/3 of the comments), I would be inclined to have a third box, possibly reserved for paying subscribers for those media companies looking to make money [Mr Murdoch], which would involve the choice. with editorial license, of best comments. These comments would be sorted in some way to provide readers with guided orientations and some overall statistics on the vast array of comments. As far as editorial voice is concerned, one interesting option would be to collaborate with value-sharing external organisations (e.g. an NGO, some reputed think tank, an academic institution, etc.). Statistics could include, for example, the number of comments strongly in favour, strongly against… There could be Featured Authors whose comments are judged by the editor to be worth more than others — comments that may not be commonly judged as popular, for example, because they were written late (ie not enough time to accumulate recommendations) or were too erudite to warrant internet reading. I would even go so far as to recognize the value of most appreciated commenters (providing some heralded recognition, if not in-kind remuneration?).

5./ Interest Groups & Chat Rooms. Another idea would be enable interest groups to be formed on the site which, like Amazon, would allow “readers like you also read this” type of functionality.

There is real value embedded in the comments section, even more so when/if the subject is about a company or a brand (i.e. for the marketers). The trick of course is to keep on encouraging commenting, all the while not publishing everything or, as the BBC would defend, keeping a neutrality in the filtration system. As MSM continue to scramble to find the right economic model, my belief is that there needs to be a closer fit with the experience of the reader. By getting closer to what the reader really wants (time savings, consistent content, aligned values, advice & education, and even entertainment …), the MSM players will find ways to give value to the reader who, in turn, will be more willing to pay for the service. How that payment is provided is as yet WIP — providing a personal address, opting in for advertisement, etc. — and a subject for another post.

I cannot practice exactly what I preach on this site (limited functionality of blogger), but I certainly would be happy to have your comments and thoughts (as usual, moderated only per the Minter Dialogue blog policy as stated at the bottom of the page).