Thanks to my good pal, Eric Blot, I was switched on to Twitter 360. 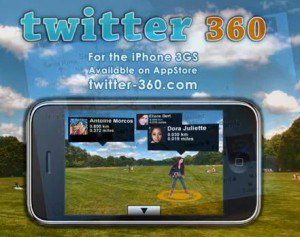 What is Twitter 360 (it shows up as “Tweet 360” on the iPhone)?  It is an accessory tool for Twitter on your iPhone 3GS which provides an “augmented reality”; i.e. it takes the virtual/abstract and adds a real component.

In this case, the application enables you to see who (among your Twitter community) is where in the world.  Merely, by logging in, the app will tell you where you are (geolocalisation is by default “off” so you have to make the effort to turn it on).  Then, according to the latest tweets in your tweet stream, you can see how far away is the person/friend/followee (down to the metre) and in which direction (with an arrow that swivels like a compass). 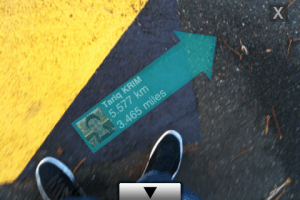 Twitter 360 is only a gadget.  But it makes you realize just how connected one can get with your community.  The question is how are brands going to capitalize on this technology in a non-invasive way?  For example, “BTW the nearest XYZ store’ is 870 metres away to the left.  If you come by and show this message, you will get a freebie…”

You can find a pretty good write-up of Tweet 360 here on AppShopper.

I had a nice couple of helpful emails with Antoine Morcos, Co-founder of Presselite (http://www.presselite.com) specifically to figure out how to use the “favourites” function (you need to click on the star to the left of the name).

At $0.99, Twitter 360 is a fun little app.  Marketers with an iPhone should take a look as it will help give you a better appreciation of the augmented reality concept.