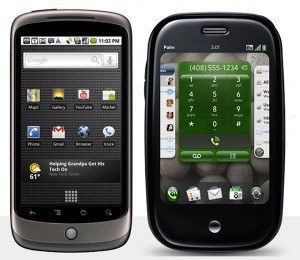 A wave of publications on 2009 results show that the smartphone invasion continued at a great and global pace, outstripping the wildest predictions of only a few years ago.  Clearly, the people are voting with their pocket books and a certain number of companies (Apple, Google, Nokia, network operators, in the first instance) are taking full benefit.  Most businesses, however, are lagging in a dramatic fashion and failing to understand the seachange under way — both from a consumption and an employee-employer standpoint.

Here’s look at the numbers*:

The worldwide market for cellular phones is nearing in on 5 billion (est 4.6B).  (If the studies say “users” or “subscribers” for each phone, I think they may overstate the case to the extent that there are many people that have multiple cell phones).   At 5 billion subscriptions, that would be roughly 3/4 of the world’s population is using a mobile phone — if there were an even 1:1 distribution.  Mobile phones are, by far, the most widely distributed high tech item ahead of, even, the radio (3.9 billion units).  Computers (1.4B) and televisions (1.5B) are just for a veritable elite it would seem.

Mobile phones have accelerated their rate of growth since 2004, in large part thanks to the smart phone (offering easier and smoother access to internet) and, specifically, the o-so sexy i-phone (and now the Android, etc.).

(already 1/3 of the total number of computers).  Landline phones are going to die an ugly if slow death (1.1 billion units and slipping).  In 2009, 15% of all the phones purchased in the world were smartphones.  In France, where I live, there were 3.6 million smartphones bought in 2009 (versus 1.8 million in 2008).  It is anticipated that the number of smartphones in the world will hit 1 billion within 3 years (i.e. double).   I would believe that is, again, a pessimistic forecast.

With the generalised arrival of the smartphone, the question is to what extent companies and their marketing teams are ready, adapting their websites and communications to this platform?

The fact that the mobile phone is intrinsically a personal object and yet has become an unavoidable business tool, is one more reason the professional needs to integrate the personal elements of his/her life. Companies set on filtering, controlling and otherwise manipulating access to the net (on smartphones) will limit their team’s ability, nay desire, to understand and interface with the mobile ‘net environment.

Your thoughts?  Who is doing a good job in adopting and adapting to the smartphone/mobile phone paradigm?