Boundary between the Personal and Professional worlds ever shrinking 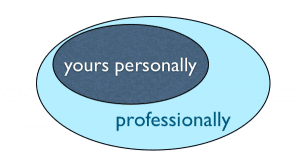 Your personal world inside a professional company?

Over the last couple of weeks, something that has caught my attention is that Facebook has been at the heart of two firings on either side of the Atlantic, one in Connecticut, USA, and one in Boulogne-Billancourt, France.  In the former case, in an initial ruling, the National Labor Relations Board (NLRB) said that the company was wrong to dismiss its employee after she put a critical remark about her boss on her Facebook wall.*  This case is due to be heard at the end of January, 2011.  In France, on the other hand, the courts ruled as justified that two employees were fired (in 2008) for “openly” criticizing their hierarchy on their ‘private’ pages. This particular case is more insidious in that a “friend” (or perhaps it was a friend of a friend) printed a screen capture which “ended up” on the desk of the criticized boss.  As suggested by French social rights specialist, Nicolas Sauvage (@ Reed Smith), you had better write only that which you have said (or are prepared to say) directly in person to the person in question.  In any event, one needs to manage carefully one’s personal wall settings and, I suggest, be more vigilant on the friends one chooses otherwise one can quickly find oneself in the Bread Line!

Both of these cases, which are clearly not unique, are demonstrating yet again the fine line between personal and professional boundaries.  Facebook’s strength has been in its hybrid nature, seamlessly navigating between work and private lives.  However, the legal line is being drawn in court rooms around the world. Implicitly, what goes on between friends at the dinner table stays at the dinner table (whether or not the dinner is at the Mandalay Bay in Vegas).  Such conversations will not be recorded for posterity’s sake.  What goes on online, however, may at any time be broadcast to millions of people.  Each culture and legal system is bound to find its own way – for now, France now has set its precedence; meanwhile, the ‘jury’ is still out as to how the US (Connecticut in this instance) will sway.  At issue, going forward, will be the way companies draw up (and implement) their Internet and social media policies.  Individuals, meanwhile, will need to learn to tame their Facebook semantics and recognize the issues at stake as well.

Wherever the conversation is taking place, companies and bosses are being bashed all the time.  It is the nature of the beast.  Individuals will always feel that they are getting short-changed by companies.  The matter generally always has two sides to the equation.  Rather than use legal parameters to stem the tide, that said, the bigger focus should be on creating a greater place to work with more evolved management skills.  With the unavoidable trend to increased transparency, no Facebook wall can be ‘papered over’ to hide unpalatable management practices.

Should companies provide training to their employees about how to manage their OWN Facebook page (much less on how to represent the company when speaking about the company in forums)?

* Read here the writeup by Reed Smith.  The dismissed person in question, Dawnmarie Souza, who worked at the American Medical Response of Connecticut, wrote on her Facebook page: “love how the company allows a 17 to become a supervisor.”  The term “17” is the company’s shorthand label for a psychiatric patient.