Today (January 15th, 2011) is Wikipedia’s 10th birthday.  And it is a great day, too.  With an Alexa ranking of 8th (not 10th!) and 400 million monthly unique visitors, Wikipedia captures daily 14% of the world’s internet users.  Wikipedia is continuing to evolve into THE reference site.  With clever bots (essentially performing automatic updates and cleansing) now well established to help keep the data up to date and to seek and destroy unallowable content, there is no getting around Wikipedia.  If there were one area of dissatisfaction, it would be the [lack of] ease with which people can participate.  Rare are the people in my daily entourage who have taken up the challenge — it seems daunting for most.  Having done so myself (about the USS Napa which my grandfather commanded during WWII), I can say it is possible.  But it takes a little studiousness (and they have a ‘sandbox’ where you can practice!).  I encourage you all to do so at least once!  Courtesy of Jane Hart, I discovered the “call to action” 10 Year Anniversary video by Jimmy Wales (Wikipedia’s founder) asking us all to join in and contribute/edit!

The community of Wikipedia authors and users has created a whole series of “10” symbols in recognition of the landmark day. 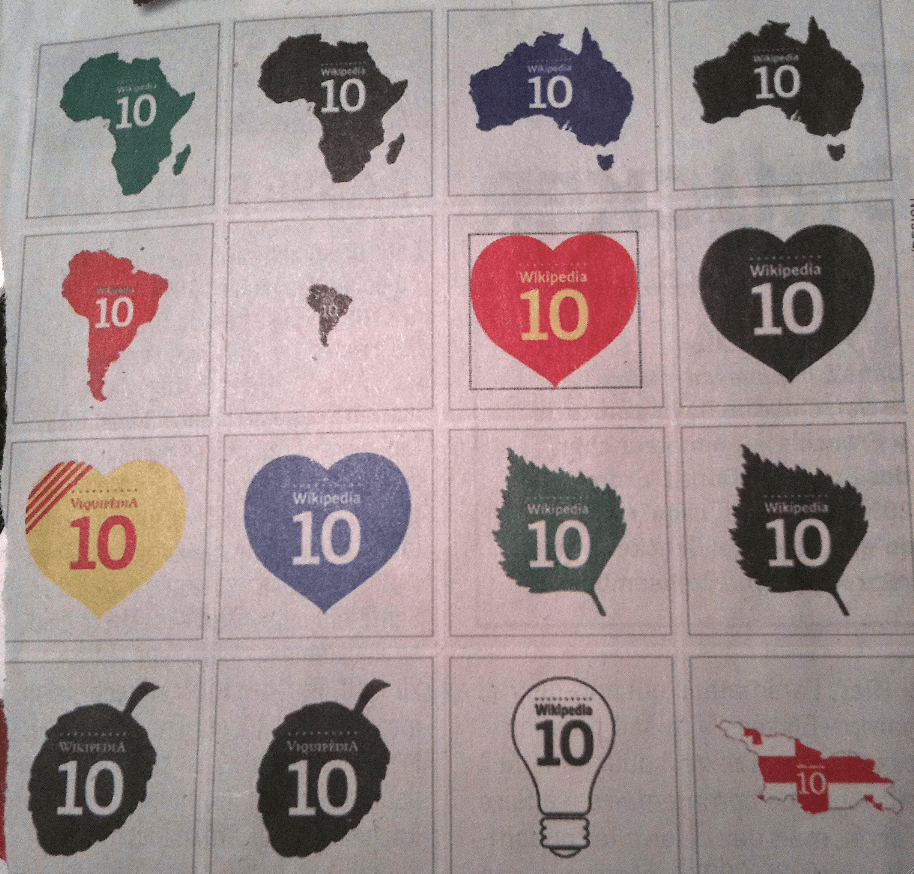 They have also created a special home page, inviting the Wikipedia community to create events to celebrate the birth DAY.  For example, if you live in Paris, you have several options throughout the day: bowling at 11am at Porte de la Chappelle and video games at 3pm “La tête dans les nuages*,” 5 Boulevard Italiens, in the 2nd arrondissement and then aperitifs at 5pm at Le Trappiste, 4 Rue St Denis.  Dinner is as yet undecided. But I am sure that will be decided offline! In a truly democratic fashion, the community managed to come to these decisions in a rather serpentine manner.  You can trace how they all did it in transparent wiki fashion.

Wikipedia inviting its community to celebrate its 10th anniversary

What other brands could manage to co-create their own birthday party on such a scale.  453 events around the globe, with 288 happening today as we speak!

In any event, wherever you may be, head in a cloud or not, Happy Birthday Wikipedia!