For all you guys out there, you should take a look at the new ManoftheHouse site [now defunct], launched by Procter & Gamble (P&G) mid-2010.  It is a novel initiative, clearly intending to take Procter into a new direction with a new editorial voice. 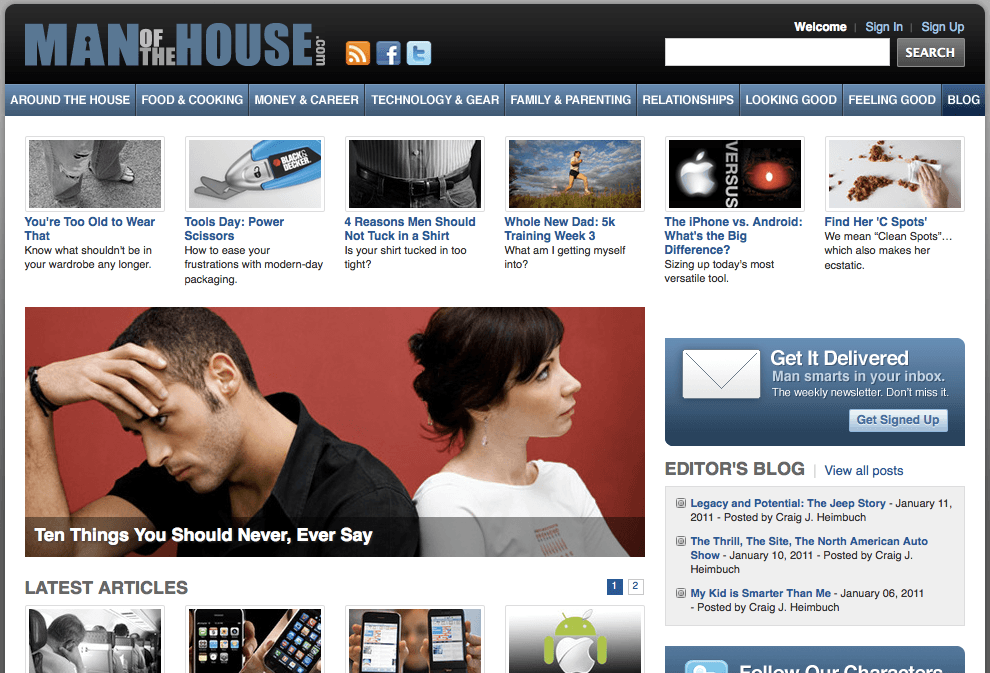 For the {Family} Man

As Procter’s spokeswoman, Jeannie Tharrington, said, with this new site, “we are trying to speak to the whole man.”  The site has some quite spicy wording for Procter including an article about “conquering sex problems;” and here is language in another post, “[i]f you want a hot woman who acts like a porn star in bed, you need to be prepared to spend some time getting her to that place…”  On the other side, the site talks about gardening, cooking and cleaning around the house.  The editor’s blog has just one or two articles a week on topics ranging from being a father, to cars and recommended books.

Launched in June 2010, the site now boasts a traffic of a half million monthly unique visitors. That is far behind other sites on the same category, (mostly with raunchier content) such as Askmen.com which has 5.5 million unique visitors.  [You can also find significantly racier content with the material on Axe, launched last year as well by P&G’s competitor, Unilever.]  One of the ‘areas of improvement’ for ManoftheHouse could be to have more video content as the site is predominantly text-based, making it sometimes a bit too heavy.

P&G have launched other similar lifestyle type sites, such as beinggirl.com (2000) and Homemadesimple; not to forget that P&G launched the original soap opera “As the World Turns.”  The target for ManoftheHouse is ostensibly the family man and it is a tricky market.  The challenge for Procter will be to carve out a standalone position in that it’s between the conversation already happening on Facebook and the racier content on askmen or Axe.  And, if I were looking for techy content, I would certainly go to more specialized sites where the expertise is more credible.  For me, in any event, this initiative reinforces what I believe will be the fight over the near-to-medium term for brands on the web: greater segmenting and niche social media.

Overall {small} thumbs up with room to grow

Having taken a spin on the site, my overall impressions are quite favorable, but I must say that I didn’t find any articles that truly grabbed my attention or answered a pressing question for me.  The site has good variety in content and I like the blogroll section at the bottom “we hang out these other sites…”  Also, on the plus side, they have displayed good discretion as to product placement (you have to go one of the last tabs “Looking Good” and click on “grooming” to find some P&G products!).  For improvements, I would suggest adding more “up-to-the-minute” content as well as more video.

It is worth the visit especially if you are a guy, family man or not.  Do let me know your thoughts!