An Unvieling of Facebook’s Growth

Not that we need to keep weekly tabs on the meteroic rise of Facebook, but there was something a little curious about the statistics that were published (thanks to CheckFacebook) about the fastest growing Facebook countries last week (week of April 18, 2011).  I noticed two things in particular. 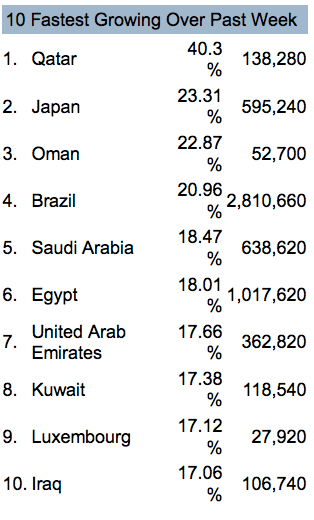 The first comment is that the growth is extremely high for a single week — albeit off low bases.  Typically growth is single digit.  Clearly, some countries are just NOW getting on board with this social media.

Secondly, there seems to be a prevalent trend in this top ten in the form of Middle Eastern countries (7 out of the top 10).  One must believe that a certain segment of the population — notably among the socially unrestful — is swarming the social network to connect with others.  Political motivation seems the obvious impetus for these spikes.  Meanwhile, Japan’s growth is probably linked to the international involvement after the Fukishima disaster — also considering Facebook’s penetration had previously been extremely weak in Japan.  Luxembourg remains a bit of a mystery both in the feeble absolute number and the spurt just last week.  Any guesses?