We have all seen and/or read about tipping points and hockey stick curves.  Digital media seems to be full of them.  None seem more powerful than the one below: the rise in awareness of Twitter in the US 2008-2010.  Perhaps inspired by the beginning of the NHL playoffs (go Flyers!), I wanted to riff on this hockey stick curve. 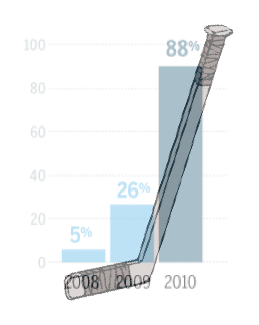 The ascension of Twitter in the digital mediasphere has been meteoric (Edison Research).  The way Twitter has become mainstream is impressive, boosted in no small part by mass media.  After a muted existence at its outset among the digital savvy nerds (from its inception in 2006), the awareness of Twitter has soared in the last two years in the US. 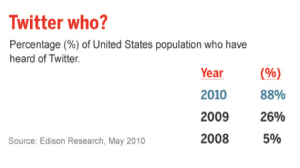 With widespread awareness come users, those who have been converted from being sitting on the bench to actually signing up for an account.  Naturally, for the most part they turn into observers, as opposed to participants (only 10% of the estimated 200 million subscribers worldwide are active).  But, does that not sound like a good thing for brands and/or people wanting to get a message out?  An audience looking for material!  One of the primary reasons Twitter is being used is as a watch post, a digital surveillance mechanism.  As far as I am concerned, it is fine with me if not everyone participates, as long as they find value from what they are reading in the Twitter stream.

Looking at my country of residence (France), where Twitter is far from mainstream (estimated at 2 million accounts, of which a paltry quarter million are active users), I believe that France today is probably closer to the 2009 mark in the US (i.e. maybe around 30% awareness, although I do not have any statistics to prove this).  Will France and other non-English speaking countries follow suit and fly up the hockey stick?  For brands and digital marketing teams, the ‘payback’ is clearly not as decisive as participating in Facebook — aside from the media, politicians and a couple of personalities, French consumer brands are yet dimly present on Twitter.  The first to pierce through on the top francophone Twitter accounts is the boutique Collette Paris with 72K followers.  My suspicion is that the 2012 Presidential Elections may yet provide a spark — it would not be without irony that the government be responsible in France for accelerating the adoption of Twitter.  The official Presidential account (“Elysee“) has 22k+ followers, an as yet anemic penetration compared to Ecology & Transport Minister NK_M at 70K followers.

But, coming back to hockey, my old home town Montreal Habs team has 124,000 followers on Twitter.  Puts things in perspective for the Twitter social media marketers in France!