MayDay, MayDay: I interrupt this fine Monday morning to bring you breaking news: Twitter is the best & fastest way to get the news.

I learned about the death of Osama Bin Laden this morning in my Twitter stream.  Apparently, this was the same experience for a good number of people.  According to the Mashable poll here, it was this way for a majority of people (for those of us who are connected to the Internet, anyway).  As of 6:30am, Paris time, 4,200 people had already taken the poll which is quite a feat considering the news broke late in the night (roughly 5am Paris time).   Note that Facebook got more than television! 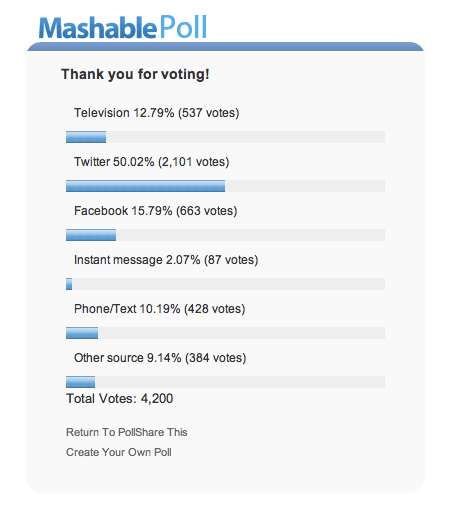 Of course, the Mashable poll is slanted because its readership is largely geeky, social media connected people.  However, I still think it is significant.  People tune in to their computer more frequently than to the television via their mobile and/or desktop.

Here is the tweet that got my attention and announced the news to me (and I particularly like this one, too): 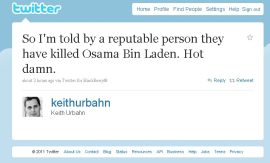 Here is the story from CNET.

Please share with us your story of how you found out about the death of #OBL?