I was mildly amused to receive the Alpha Invitation to join Diaspora.

Just after having written about social media fatigue and the continuing appearance of new choices in social media, here comes yet another choice.  A long time in the making, Diaspora* (www.joindiaspora.com) has the makings of a different offer.  The brainchild of 4 NYU maths students (Dan Grippi, Maxwell Salzberg, Raphael Sofaer and Ilya Zhitomirskiy), Diaspora* is being touted as the “solution” for those who are concerned about the privacy issues on Google or the questionable and ever-changing ethics of Facebook.

As opposed to the wall gardens of Apple itunes, Myspace, Facebook and Google+, the concept behind Diaspora* (D*) is to be totally open to all, be it all networks, all people, all programs, all games.  Your content is, however, to be your own.  You own it and you control it — even if it may be in the cloud. 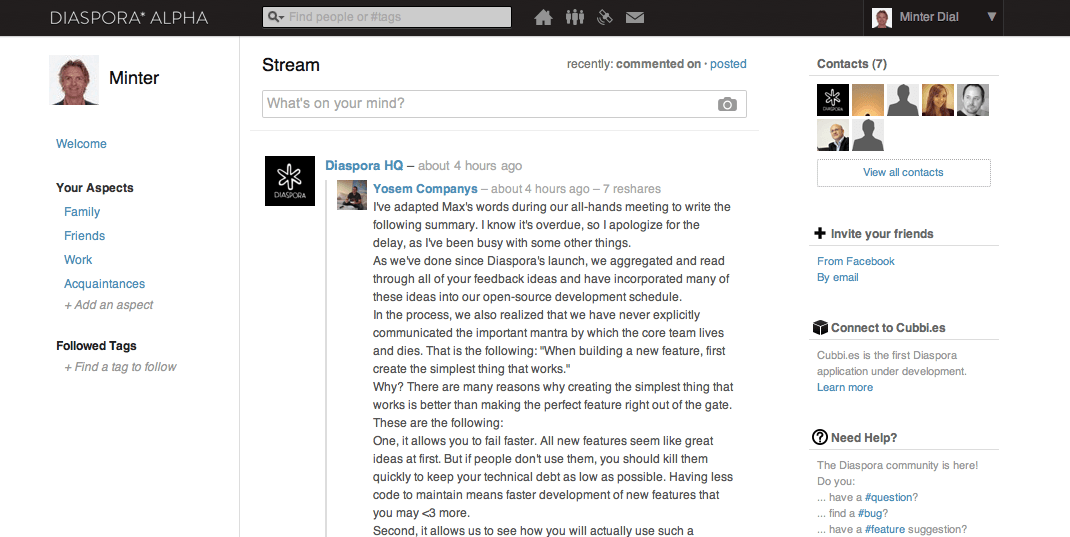 After the initial Alpha rollout (starting last autumn), a year later Diaspora+ is now going mainstream.  My year old request for a profile landed in my inbox yesterday.  I have signed up and below are my initial feelings about the site.

Overall, I plan to watch this one from afar.   I see two main challenges for Diaspora*: gaining critical mass (with a double entendre on critical); and the non vetting of games and incoming programs (quality, viruses, etc.).

I’d love to hear your point of view.  Are you open to Diaspora*?  How good an idea is it, really?