To FB or not FB – That is the question:

But really, here’s what I got to say to ya’ll: You see that apple on your computer? Notice that there’s only one bite taken out of it. This means that there’s a whole lot of fucking apple left over for you! Go out into the world and take another bite, a BIG bite or two, and may the Darwin be with you. 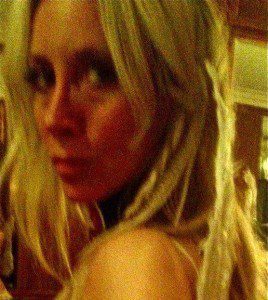 Lili Tarkow-Reinisch is a songwriter, born in the United States and living in London. Her musical career, which began with her writing with Paul Herman {Dido, Eminem, Corinne Bailey Rae} includes 3 songs on “The Millionaires” album ‘{Hush Little Boyfriend’, ‘Gangstar’, and ‘The Good, the Bad and The Ugly’.  Lili co-wrote ‘Teenage Girls’ on the Platinum selling “Good News” album by Lena, winner of The 2010 Eurovision Song Contest, and the track, ‘Too Much Love’ with Ellie Goulding (see on YouTube).  Lili has 3 songs on the Frida album, “September Blue”, which was released in Europe on 17the March, 2012 and went to Number 1 on the ITunes Charts.  Currently,  Lili is writing with legendary producer/song-writer Mike Chapman {“Parallel Lines”, ‘Simply The Best’, ‘Hey Mickey’, ‘Living Next Door To Alice} on albums with singer/songwriters Nell Ryder and David Jordan.  Lili’s work with Niara Scarlett and Ava Leigh can be heard on the tracks, ‘Once Love Sings’ and ‘Lola’ which are on the upcoming Ava Leigh album, produced by Jonathan Shorten. To follow Lili, or find Lili’s music, contact Lili on her brand new account on Twitter @Lilibelle2.