calls them “topics.” Using its internal algorithm (based on some “400 variables”) and the +K (endorsements given by other Kloutists), Klout will provide you a list of your topics.  The topics are not necessarily topics of influence, but topics of interest.  This list is entirely manageable; that is to say, each Kloutist can control his/her own list.  The only “visible” credential is the number of +K recently attributed against each topic.  Here is what Klout writes: “Topics represent your passions and areas of expertise. Klout suggests topics for you based on your content that receives the most engagement from others. You or anyone on Klout can add topics to your profile to better reflect who you are and what you talk about.”  According to the Klout community (+K), my strongest areas of “interest” would be:

With Klout’s topics, the fact that they can be entirely manipulated means that they hold no veritable value.  Moreover, since the +K is only for “recent” endorsements, they must be considered somewhat ephemeral.

now works with Facebook – a feature that was added April 2012 – and LinkedIn.  Up until then, it only measured your Twitter presence.  Tumblr integration into Kred is apparently en route as well.  Kred, which now logs 500 million profiles, identifies your communities and allocates a Kred (and outreach) score against each community.  These communities are listed in descending order and cannot be manipulated.  To quote Kred, “Communities are groups of people connected by interests and affiliations.”  With kreditable transparency, they write, “Kred places you in communities based on the interests you express through your Twitter Bio and the hashtags and keywords in your posts over the last 1,000 days.” 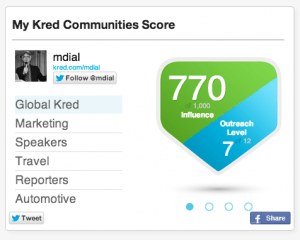 Thus, according to Kred, my communities would be (Kred score/outreach):

These compare to my weighted total Kred score of 770/7.  I, thus, deduce that my “general” outreach is better than in my specific communities.  The bigger question is the way these communities have been identified for me.  When I sat back and reflected, I actually marveled at this list.  Marketing and speaker are indeed a perfect fit.  If I don’t consider myself an expert on travel, I definitely belong to the road warrior community.  As for reporters, as an inveterate blogger, I am happily accepting this community.  Automotive?  Well, I have connections in the auto area thanks to my father who worked in that field for thirty years; and I have had the chance to work with a couple of automotive companies as a consultant.  However, it’s certainly not one of my top 5 communities.  On balance, I must avow, that it is a list of communities that bespeaks a rather clever algorithm.

If Kred puts forward greater transparency on its measurement systems and integrates offline credentials, these communities are crafted in ways that are, well, rather crafty.  Still need to bulk up my Kred outreach within the different communities, it would seem.

PeerIndex is the third rider of online influence measurement.  Its scores are based on a wider string of online presences than Kred, including Twitter, Facebook, Linkedin, Quora and your blogs/websites, but that appears to be less than for Klout. In the PeerIndex Help area, I note that it incorrectly says that the TPI looks at Google+, which cannot be since there is no way to link to your G+ account.

Beyond a general score, PeerIndex also identifies your key topics and attributes a score against each one.  Different again from Klout or Kred, PeerIndex proposes 8 fixed benchmark categories (left hand side).  You can’t interfere with these benchmark topics, which are much broader than Kred communities.  Oddly, the topics are not sorted either alphabetically or by PeerIndex score.  On the right hand side, you find your own topics of influence, graded with a PI score: “These are the subjects in which you consistently drive conversation and engagement. This is how we generate your TPI (Topical PeerIndex).” 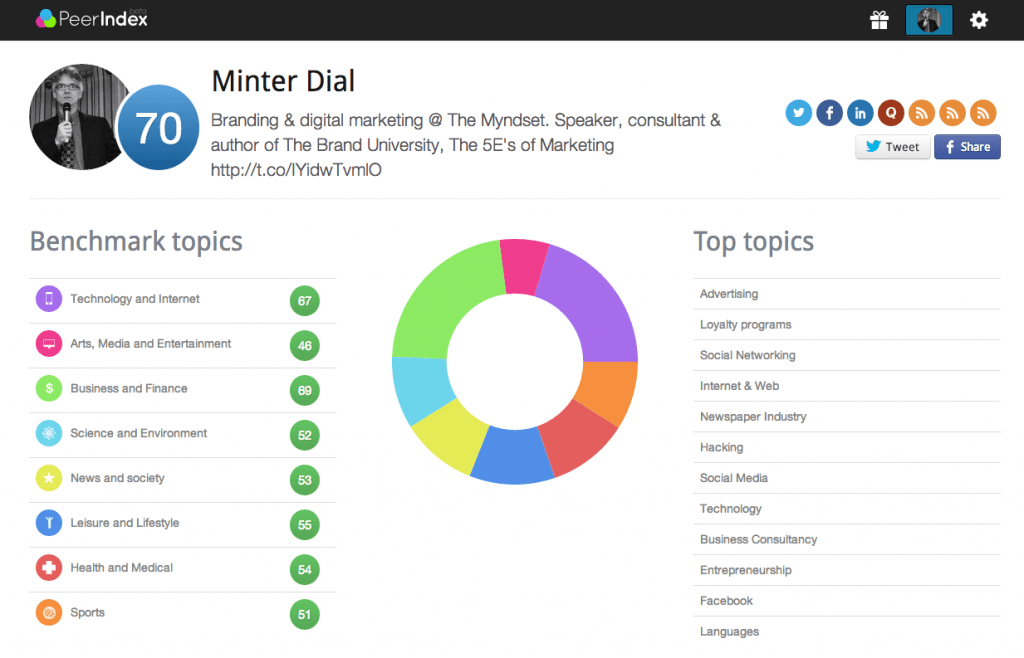 The TPI for this list of 12 topics for me ranges from a top TPI score of 78 (advertising and loyalty programs) to 70 for languages.  Whereas in Kred, my specific communities straddled my general score, here I score above my general score in each of my areas of interest.  I find that rather more credible. 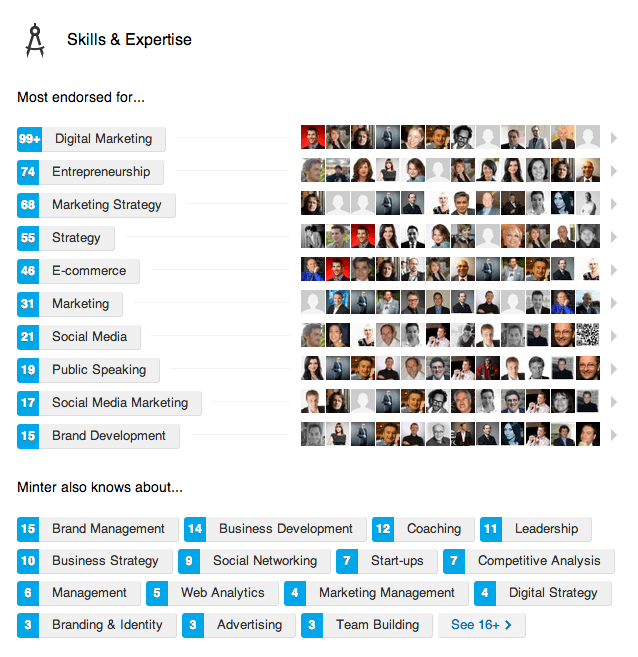 The final leg of this post on influence measurement schemes regards Linkedin.  Linkedin has two ways of viewing influence.  First, they have gone to great lengths to identify the heavy hitter influencers on the LI network, in an effort to promote the “thought leaders.”  The other concept relates to peer endorsements.  Much like the +K of Klout or the +Kred, LinkedIn users can endorse one another.  And, like Klout, you can manage your endorsements, choosing which appear, filtering who has endorsed you and proposing other skills & expertises.   I believe that the absolute number of endorsements should be weighted to reflect the number of connections, otherwise, we’re still looking at a race for the biggest number.   The real attractivity of this system is that it enables you to understand best and most transparently how others view you.  {Please Click to Tweet!} The only unfortunate element lies in the confusion of the overlapping titles.

Overall, there are some consistencies.  The reading of the online influence measurements probably paints a reasonably accurate picture taken together.  However, for each system, one needs to understand the intricacies and differences.  There just two topics that appear in at least 3 of the 4 systems: marketing and social media.  I suppose that’s fair!  What about for you?

The influence measurement systems are an area of fascination for me and, while none is perfect, they have the merit of existing and, I’m sure, will get better over time if they can find a way of making money without having to corrupt themselves (i.e. have to bend over backward too much to get business). {Click to Tweet!}  Here are some final conclusions:

What if… there were a service that became the “uber” score, cumulating the best of all the different services out there?  Sounds like a tricky business model considering the underpinnings of such a service are still finding their own legs.  Your thoughts?  How do you relate to these influence measurement systems?