Do you suffer from too many emails cluttering up your inbox? Thanks to my friend Daniel Rowles (@danielrowles) and his ever useful Digital Marketing Podcast, co-hosted with Ciaran Rogers, I learned about a service that automatically deals with your newsletter subscriptions. The service is called unroll.me.

Tidy up the newsletter subscriptions

It is frightening how emails pile up. A large number of them are undoubtedly newsletters to which you may or may not have signed up. In my case, it turns out that I had 452 different email subscriptions punishing my inbox. While Gmail helps by stashing many in the “update” tab or simply putting them into spam, they still add up.  Even after I had set up filters to avoid others passing into my inbox, the newsletters continued to pour in, creating a lot of wasted time and space. In 2013, according to their site, unroll.me was responsible for cleaning up a billion subscriptions. For this year, they can now add another >250 to that tally (with the service they gave me). If unsubscription becomes totally painless on unroll.me, you do need to double check a few that appear as duplicates. Meanwhile, for the remaining subscriptions you can choose to “roll up” these into a regrouped email, using intuitively created sub-categories. Quite nifty.

I highly recommend unrollme! The service is free — and robust if you tweet out a shoutout in their favor.

If there were any further need to understand the power of a social email, I thought this stat from unroll.me was powerful. It shows which newsletters are the most popular (because less people choose to unsubscribe from them!): 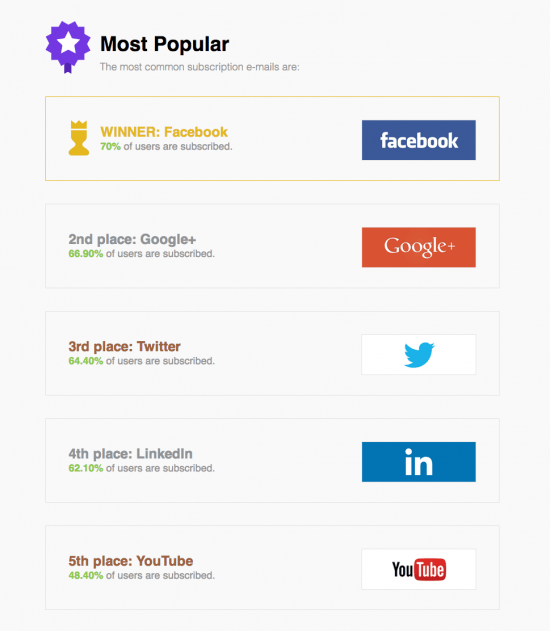 As you can see above, the sites that seem to have it right are all social media pure players. Naturally, their emails tend to be only about their own service. But, seemingly, that’s what people want: social emails!  I suggest that we all take stock of what they do in terms of content and functionality (shareability) for our own email marketing practices!

A nice touch: the site highlights those companies whose newsletters are most unsubscribed: a certain wall of shame! {which was taken down November 2015} 1-800-Flowers.com comes in tops, with Expedia coming in a rather unfortunate 4th. Companies and brands that automatically sign up people because they filled in a form or bought an item should think twice! Email is cheap, but the risk of creating a backlash and being shown up for “pushy” and ugly marketing practices may be around the corner!

Thanks again to Daniel and Ciaran.

How much do you love unroll.me?